Acer’s Iconia W3 is set to be the first Windows 8 tablet with an 8 inch display to hit the streets. The little tablet has a list price of $380, but it’s already available for pre-order from Office Depot for as little as $350.

For that price you get a tablet with an Intel Atom Z2760 Clover Trail processor, 2GB of RAM, 32GB of storage, and the full Windows 8 operating system, rather than the stripped-down Windows RT software running on some tablets in this price range.

The Iconia W3 also ships with Office 2013 Home & Student preloaded, which makes it seem like even more of a bargain.

Unfortunately Acer had to cut a few corners in order to keep the price low. 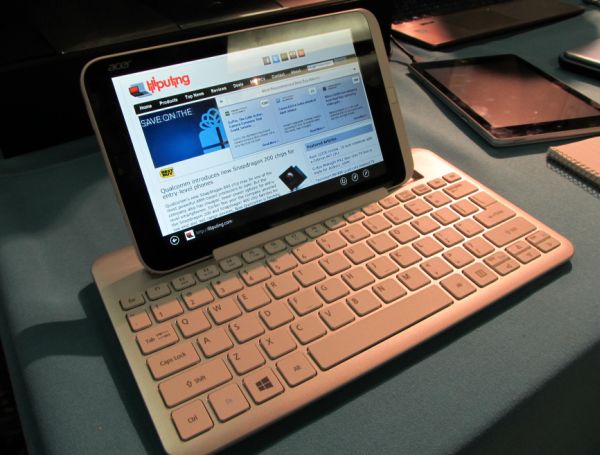 I got a chance to spend a little time with an Iconia W3 table this week, and the good news is that it’s light-weight, easy to hold in one hand, and it really can run just about any Windows app, although most won’t run as quickly as they would on a device with a faster processor.

The bad  news is that the tablet has a TN display with limited viewing angles, and feels kind of sluggish compared to other Clover Trail tablets I’ve used.

Over the past few years, Apple’s smartphones and tablets popularized the use of IPS displays with wide viewing angles in mobile devices. That means you can hold an iPhone or iPad from pretty much any angle, and the screen still looks great.

That’s not a detail that matters much on a laptop or desktop display, since odds are that you won’t be looking at the screen from too far above or from the left or right sides. But phones and tablets are devices that you may use while placed down on a table or countertop, or at any number of angles while holding the device in your hands. So viewing angles matter.

Unfortunately if you hold the Iconia W3 the wrong way, you’ll start to feel like you’re looking at a photo negative or a blank screen instead of a tablet. 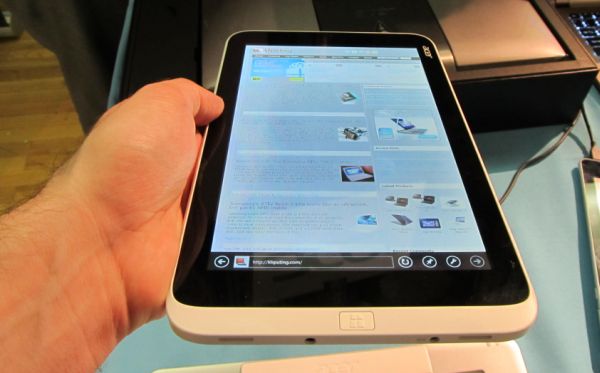 As for the performance, while swiping through the Windows 8 Start Screen and switching apps I noticed the graphics seemed a bit jumpy. That’s not the case on other recent Windows 8 tablets with similar hardware (but larger screens) such as the Lenovo Miix 10 or Samsung ATIV Tab 3. So I’m hoping there was just a problem with the demo unit.

It’s also possible the software on the tablet needs to be tweaked a bit before launch.

All told, the Iconia W3 still looks like an interesting device for $350 for folks that want a mobile device to use not only for surfing the web, watching movies, and playing games, but also for using Microsoft Office. Just don’t expect any miracles from what’s essentially a budget device.