That said, it’s also expensive — the 2019 Acer Swift 7 is expected to sell for $1700 and up when it launches in China and Europe in April and North America in May. 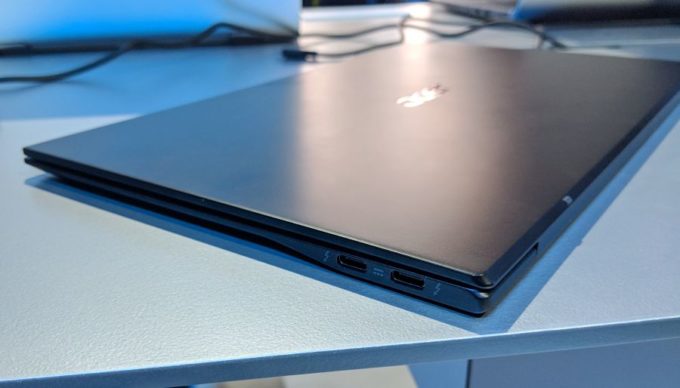 It’s also worth noting that this laptop clearly prioritizes its svelte design over just about everything else — there aren’t a lot of ports, the camera is awkwardly placed, and the system has a relatively low power processor for such an expensive computer.

But it’s still hard not to marvel at this thing. It’s just so much smaller than you expect a 14 inch notebook to be.

The notebook has an Intel Core i7-8550Y Amber Lake processor. That’s a 5 watt, dual-core chip. This isn’t a computer designed for gaming or video editing. But it should be sufficient for web browsing, document editing, and other casual or business-related tasks.

It supports up to 16GB of RAM and 512GB of storage, and the 1920 x 1080 pixel display features 100 percent sRGB color gamut and it has a Corning Gorilla Glass 6 panel protecting it. 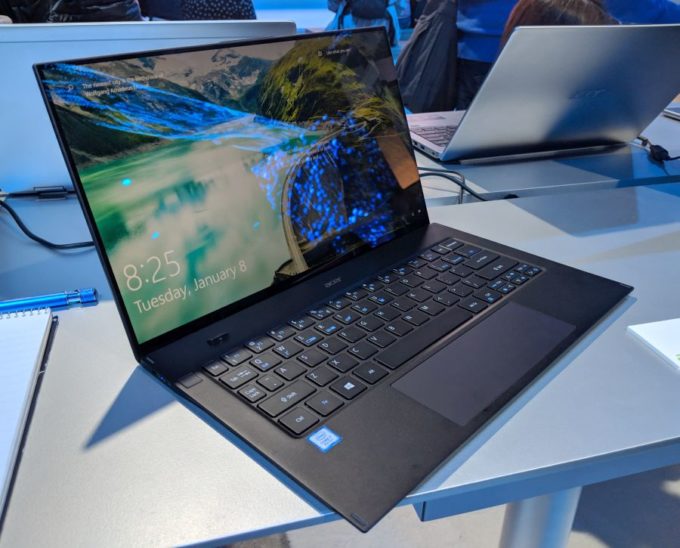 What the notebook doesn’t have are a lot of I/O options. There’s a headset jack on the left and two Thunderbolt 3 ports on the right. That’s it. You can connect a USB dock or hub if you need more, I guess.

The lack of a dedicated video out port or a USB-A port is a little annoying, but it would have been hard to fit full-sized connectors on a laptop this thin.

The bezels around the display are thin… so thin there’s no room for a webcam above the display. So Acer borrowed an idea from the Huawei MateBook X Pro and stuck a retractable webcam into the body of the laptop. It’s above the keyboard instead of hidden inside it, but the idea is basically the same: press the key and the camera emerges. Press it again and it goes away.

I could be mistaken, but the keyboard also seems to be a little on the small side. It took me a moment to get used to the layout, but just a moment. I was typing at full speed pretty quickly after I started playing with the Swift 7.

There’s a fingerprint sensor to the left of the keyboard, and an unusually wide touchpad below it.

I’m curious to know whether the laptop’s low-power processor enables all-day battery life: Asus promises up to 10 hours of run time, but that’s based on the MobileMark14 test, which tends to be very generous.