That means this inexpensive tablet can run apps from the Windows Store as well as desktop Windows apps. It even comes with a 1-year subscription to Microsoft Office 365.

So can a $120 Windows tablet with a tiny display be any good? Well, that depends what you’re looking for. 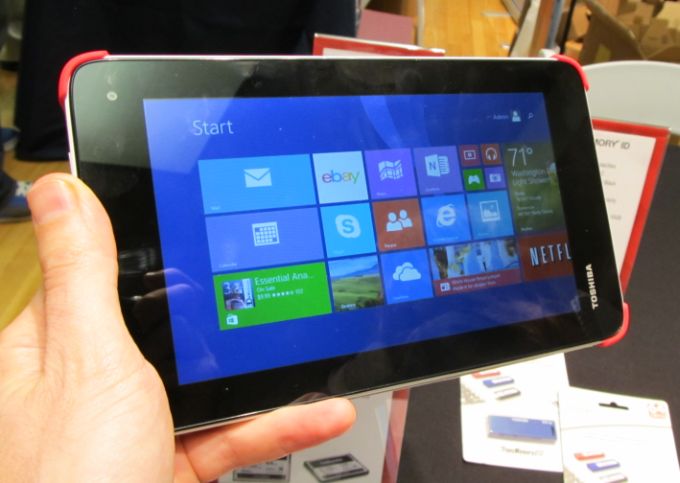 I haven’t had time to extensively test the tablet, but I did get to spend a few minutes with it recently, and the tablet is small, light-weight, and seems like it should be fast enough to run basic Windows apps including Skype or Internet Explorer.

But Toshiba cut a few corners in order to keep the price low. The tablet has just 1GB of RAM and 16GB of storage which could cause problems with multitasking or running memory-intensive apps.

That’s also not a lot of built-in space for apps and media, although there is a microSDXC card slot for up to 128GB of removable storage. So if you need more room for music, movies, or other files, just get a big microSD card.

The biggest problem with the tablet is the display. Toshiba chose a 1024 x 600 pixel panel with limited viewing angles. Tilt the table the wrong way and it can be hard to see what’s on the screen. 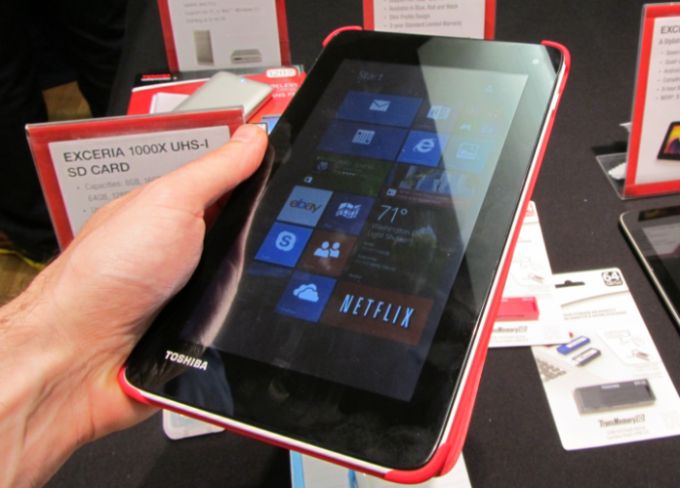 Since some Windows 8 features require a higher resolution display, the Toshiba Encore Mini uses a display driver that allows it to act as if the tablet had a 1280 x 768 pixel display.

This lets Windows Store apps run on the tablet, but since the device doesn’t actually have that many pixels, apps, pictures, and text won’t look quite as sharp on this tablet as they would on other small Windows tablets with higher-resolution screens.

Overall it’s impressive to see the full Windows operating system running on a tablet this small and this cheap. But while Toshiba was the first major company to offer a Windows tablet in this price range, it won’t be the last.

HP has just unveiled its own 7 and 8 inch Windows tablets which will sell for $100 and $150, respectively.

While the Toshiba Encore Mini has a list price of $120 though, Toshiba representatives expect it’ll be discounted and sold for as little as $100 this holiday season.