There seem to be a lot of unboxing and hands-on videos and photos floating around today, so rather than bore you with a bunch of separate posts, I figured I’d just do a quick roundup. 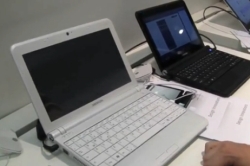 Sascha from Netbook News got some hands-on time with the 1313, and with the 1315, which is basically the same machine, but with a touchscreen. You can check out his video after the break.

Like the Medion akoya Mini 1313, the Packard Bell Dot M/U goes by another name in some parts of the world. The laptop is basically the same as the Acer Aspire 1410 in the US and Acer Aspire 1810T in Europe.

Blogeee has snagged a number of close-up photos of the Dot M/U, and while it looks an awful lot like the Acer Aspire 1410 I’ve been testing for the past week, there are a few minor differences, most cosmetic. Of course, the Packard Bell Dot M/U has a Packard Bell logo instead of an Acer one, even though Acer owns Packard Bell. There’s also a thin stripe on part of the netbook which gives the laptop a (tiny bit) of flare. The Asprie 1410 simply has an Acer logo on the lid.

You can find more photos of the laptop and its box at Blogeee.

The Samsung N140 is a slightly tweaked version of Samsung’s existing netbooks. But it turns out it might not be quite as tweaked as we had originally thought. SammyNetbook reports that at least one user in the UK has already received one and discovered that it has a 1.6GHz Intel Atom N270 processor instead of the 1.66GHz Atom N280 CPU he had been expecting.