Lenovo’s new Yoga Book C930 dual-screen laptop is set to ship in October for $1000 and up.

Like the original Yoga Book, the new model is a thin and light convertible laptop with support for pen input, and something unusual in the spot where you’d normally find a keyboard. But instead of a Wacom graphics tablet in the lower section, the new Yoga Book C930 has a black and white E Ink display.

Lenovo unveiled the Yoga Book C930 in August, and I got my first chance to spend some time with it at an event in New York City this evening. I’m not sure how I feel about the keyboard yet, but I do like the idea of a 1.7 pound convertible with a high resolution display (or two). 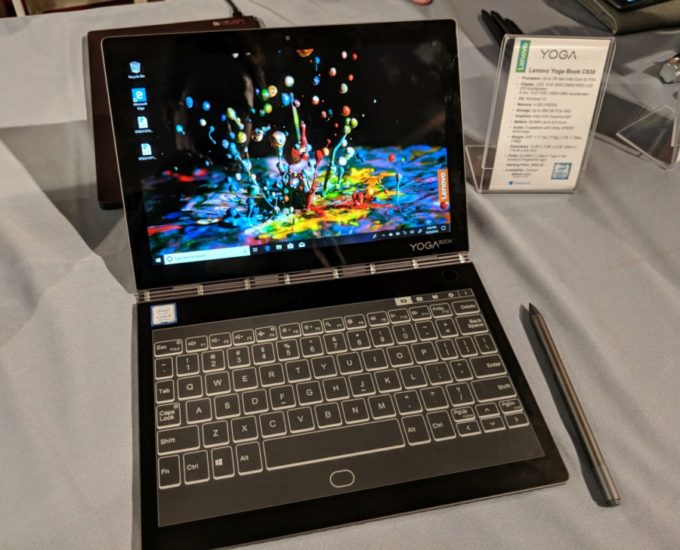 The computer is just a tiny bit heavier than a first-gen iPad (which weighed 1.5 pounds), which had only a single display (and no keyboard). And measuring 10.3″ x 7.1″ x 0.4″, the Yoga Book C930 feels small enough to comfortably hold in one hand, for a little while anyway.

Sure, the bezels could be smaller. But they didn’t really bother me in my hands-on time with the convertible tablet. And the watchband-style hinge makes it easy to fold the computer flat in tablet mode or prop up the screen for use in laptop, tent, or stand modes.

Under the hood, the new Yoga Book is powered by up to an Intel Core i5-7Y54 processor. While that’s not the most powerful Intel chip around, it’s a big step up from the Intel Atom X5-Z8550 processor that powered its predecessor. The upgrade should bring better performance without generating much more heat: the new Yoga Book is still a fanless computer.

Lenovo says you should be able to get about 8.5 hours of battery life from the system’s 35.8 Wh battery.

Other features include 4GB of LPDDR3 RAM, up to 256GB of PCIe SSD storage, two USB 3.1 Type-C ports, a fingerprint sensor, stereo speakers with Dolby ATMOS sound, and an option for 4G LTE support.

But it’s the E Ink screen that really makes this laptop unusual. You can use it as a virtual keyboard, a writing slate, or as an eReader for viewing PDF documents. 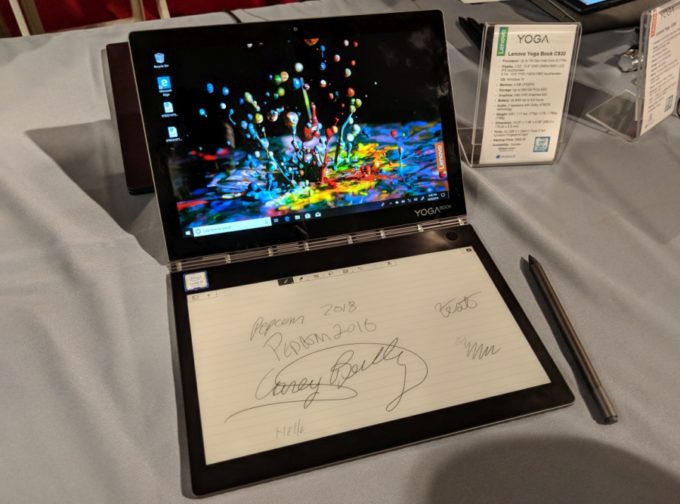 There’s an on-screen button that you can press to flip between modes. The writing and eReader modes both work whether you’re using the Yoga Book as a laptop or a tablet. The keyboard is only enabled in laptop mode.

While the “keyboard” vibrates and the keys provide a little animation when you press them to give the illusion that the’re moving, you can’t actually feel where one key ends and the next begins, which could make the Yoga Book a bit tough to get used to for touch typists. But if you have a pretty good idea of where your fingers should be, you should be able to tap out text at a reasonable speed. 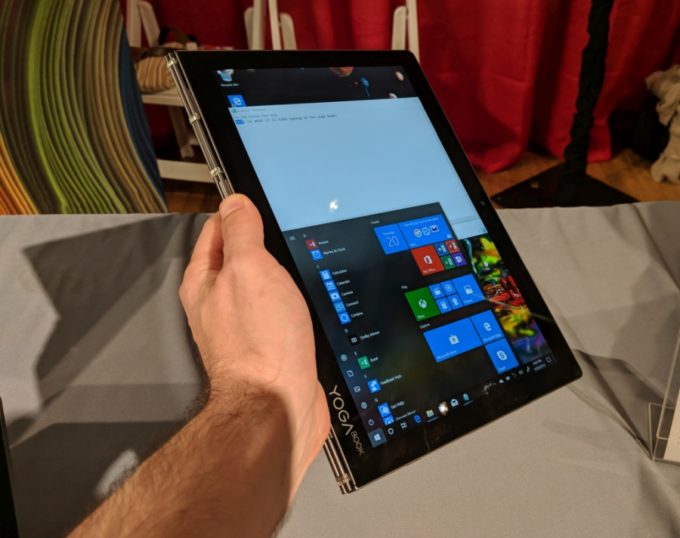 Generally speaking, the Yoga Book C630 feels to me like a tablet device first and a notebook second, unlike most laptops with 360-degree hinges. You can type. But this is a device that’s really designed for people who want to do more than type on a device.

My handwriting is awful and my drawing ability is less than stellar. But I’m still intrigued by this unusual little device… partly because it’s just so weird, and partly because it really does seem to fit a niche that’s not served by most other convertibles: it’s a small, light, quiet machine that’s designed first and foremost for people who value pen input but want the versatility of being able to type when that’s a form of text input that makes more sense.