It’s available from Lenovo for $311.20, making it one the cheapest tablets from a company you’ve heard of that ships with Android 4.0 and Google Certification (which means you get the Google Play Store, Google Maps, Gmail, and other official Google apps).

I got a chance to check out the S2109 in person last night, and while it’s not the fastest tablet on the market, it’s got a few things going for it. 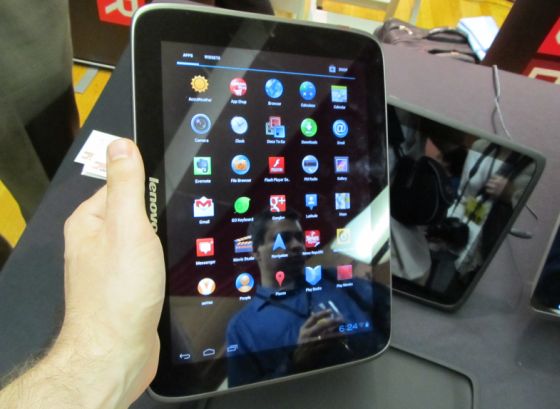 First, Lenovo has decked out the rear of the tablet with speakers, allowing you to get stereo sound pretty much no matter which way you’re holding the device.

Second, unlike some other relatively cheap tablets (I’m looking at you, Amazon Kindle Fire), the IdeaTab S2109 includes Bluetooth 3.0, a micro HDMI output, and a microSDHC card for expansion. It also has a front-facing 1.3MP camera.

On the other hand, if you don’t need the camera, Google Play Store, Bluetooth, or Android 4.0 software, the Barnes & Noble NOOK Tablet and Amazon Kindle Fire both have the same processors. Those tablets also have 1024 x 600 pixel displays with a 16:10 aspect ratio.

The 4:3 screen on the IdeaTab S2109 is similar to the screen you’d find on the original iPad or iPad 2 and makes for a good web browsing or eBook reading experience. But many Android apps, especially games, are designed for widescreen displays and might not work as well on the S2109. Widescreen videos will also show black bars above and below the picture window on the tablet.

Weighing about 1.25 pounds, the tablet felt pretty good in my hands. And while it doesn’t have the Corning Gorilla Glass scratch-resistant displays found in pricier tablets, Lenovo says the screen is chemically treated to improve durability.

Lenovo also includes a free protective cover for the back and sides of the tablet, although it does not provide any screen protection. It’s made of a rubbery material and has a textured design on the back, making it easy to grip the tablet, even if you have sweaty hands after spending some time outside in the 96 degree weather… not that I had a chance to test that this week or anything.

The Lenovo IdeaPad S2109 is the first member of the Lenovo S2 tablet family to go on sale in the US. But the company expects to bring the S2 10 tablet with a 10 inch widescreen display and an optional keyboard docking station to market this fall. It’s already available in China.