Back in 2008, MSI was a major player in the birth of the netbook space. These days the company is still making notebooks, but most folks who are familiar with MSI probably know them for their motherboards, graphics cards, and other high-end PCs.

But the company is making another play at the low-cost portable computer space with a few new devices featuring AMD’s latest low-power processors. The company’s new MSI W20 tablet is an 11.6 inch Windows 8 tablet with an AMD Temash processor, and the MSI S12T is a portable notebook with an AMD Kabini chip.

At 1.5 pounds, it feels surprisingly light for a tablet with an 11.6 inch screen — or maybe I’m just stronger than I used to be.

Thanks to a 34.78 Whr battery, MSI says you should be able to get up to 9 hours of battery life. And the low-power processor runs cool enough for MSI to package the W20 as a fanless tablet — there’s no fan noise, because there are no fans. The 128GB solid state disk is also more quiet than a traditional hard drive (although it’s not like you find a lot of portable tablets with hard drives these days).

And since this is a Windows 8 tablet rather than an RT model, it can run pretty much any Windows app.

AMD insists that it still has the edge over Intel’s latest Atom chips in terms of graphics performance, but I’ll be waiting until I get a chance to spend more time with a Bay Trail tablet and an AMD model before deciding whether I agree. But the MSI W20 seemed pretty zippy during the few mintues I got to spend with it.

The model I got to check out featured 4GB of RAM and a 500GB hard drive, but MSI may also offer a model with solid state drive. 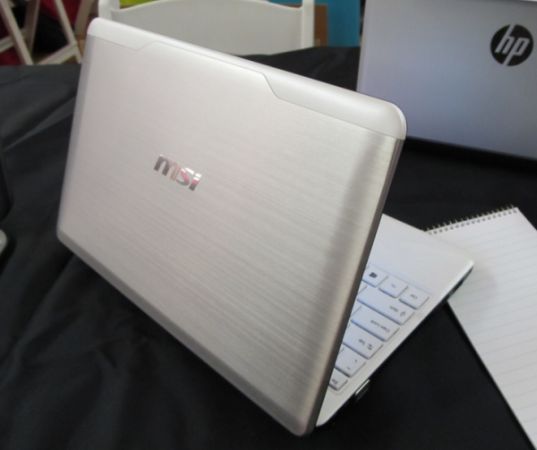 There are 2 USB 2.0 ports, 1 USB 3.0 port, VGA and HDMI ports, and separate mic and headphone jacks — something that’s becoming a rarity in the age of combo headset jacks.

At about 1.2 inches thick, this notebook wouldn’t qualify as a ultrabook even if it had an Intel processor rather than an AMD chip. But at 2.9 pounds, it’s lighter than most ultrabooks, making it a pretty decent option for a low-cost ultraportable.

Unlike most portable notebooks these days, there’s also an access panel on the bottom of the MSI S12T, which should make upgrading the hard drive, memory, or other internals easy. The 3 cell battery is also user replaceable.

The bottom part of the chassis is made of plastic, but there’s an aluminum lid. The touchscreen seems reasonably responsive, and the keyboard has a bit of flex in the center, but generally feels comfortable to use.

Unfortunately the weakest link is probably the touchpad below the keyboard, which is ridiculously tiny. It might be the same size as the touchpad MSI used to include on 10 inch netbooks, but it seems out of place on an 11.6 inch model with a full-sized keyboard.

MSI hasn’t announced pricing for the tablet or notebook yet, but they’re both expected to go on sale in time for the holiday season.