Lenovo’s new ThinkPad X1 Carbon laptop, ThinkPad X1 Yoga convertible, and ThinkPad X1 Tablet are all on display in Las Vegas during the week of the Consumer Electronics Show.

While the X1 Yoga and X1 Tablet got relatively minor spec bumps this year, the newest ThinkPad X1 Carbon got a major overhaul.

It’s both smaller and more powerful than previous laptops to bear that name. 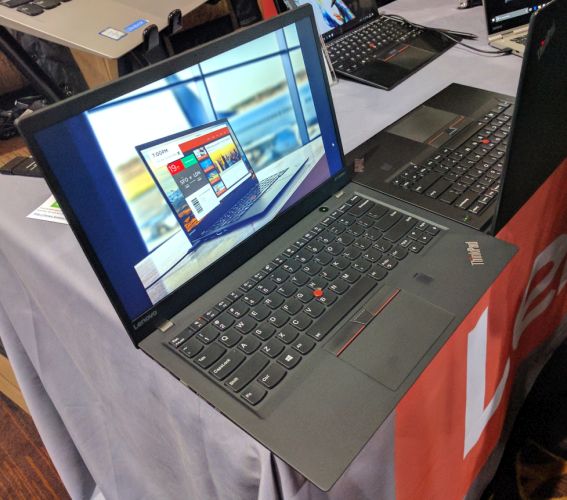 The laptop, which is set to launch in February for a starting price of $1350, is a 14 inch notebook with slim bezels and a body that’s closer to the size of a typical 13 inch notebook than one with a 14 inch screen.

LG has a similarly-sized device, but while LG put the webcam below the screen in order to keep the bezel above the display small, Lenovo managed to squeeze in a camera at the top of the display, which means you’re less likely to accidentally capture your fingers (or your boobs) when using the camera.

There are Thunderbolt 3, HDMI, and USB ports around the sides, and like most ThinkPad notebooks, there’s a pointing stick in the center of ht keyboard in addition to a touchpad below.