Lenovo’s latest Yoga computer might look a little familiar. It’s called the Lenovo Yoga 2, and it’s basically a moderately cheaper version of the Yoga 2 Pro which launched in late 2013. Prices start at about $999 for this model rather than $1099 for the Yoga 2 Pro.

But in at least one way, you might actually get more for your money with the cheaper 2-in-1 laptop/tablet hybrid. 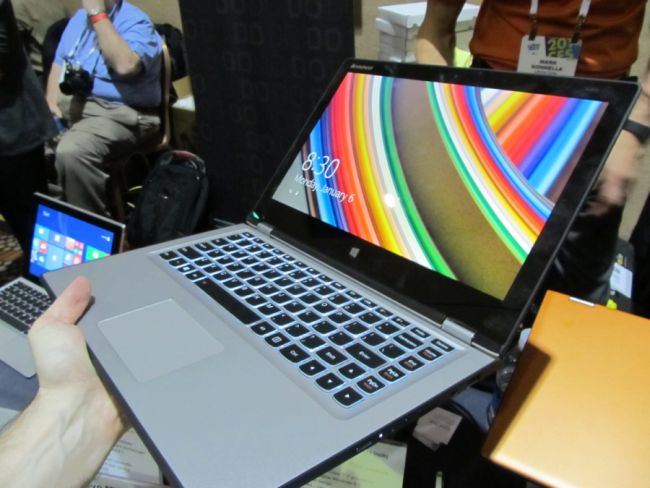 Like the Yoga 2 Pro, this convertible is basically a 13.3 inch laptop with a display that you can fold back 360 degrees until it rests behind the keyboard, allowing you to hold the device like a tablet. You can also make a triangle shape and stand up the computer on a desk or table in what Lenovo calls “tent mode.”

And like the Yoga 2 Pro, this model has an Intel Haswell processor, a backlit keyboard, and long battery life. The Yoga 2 should get up to 8 hours of run time, which isn’t quite as good as the 9 hours promised for the Pro model, but it’s nothing to sneeze at either.

Here’s what’s different: The Yoga 2 has a 1920 x 1080 pixel display instead of a 3200 x 1800 pixel screen, and it has a hybrid hard drive with a small amount of solid state storage instead of an SSD. That means you get some of the benefits of an SSD including quick boot and shutdown times, but much more storage: The entry-level Yoga 2 Pro comes with 128GB of storage, but the Yoga 2 has 500GB.

There are some trade-offs. This model is a hair thicker, measuring about 17.2mm (0.68 inches) instead of 15.5mm. It also has a plastic case instead of a magnesium alloy case, and it weighs a little more, at 3.5 pounds instead of 3.06 pounds.

It’s expected to launch around late February for $999 and up.