Meet the cheapest member of the Lenovo Yoga convertible PC family to feature an Intel processor. The Yoga 2 11 is a notebook with an 11.6 inch display which you can fold back until it rests opposite the keyboard so you can use the system as a tablet.

It looks a lot like the Intel Ivy Bridge or Sandy Bridge-powered Yoga 11S or the ill-fated, ARM-powered Yoga 11. But this new model features an Intel Bay Trail processor, and a relatively low starting price of $529. 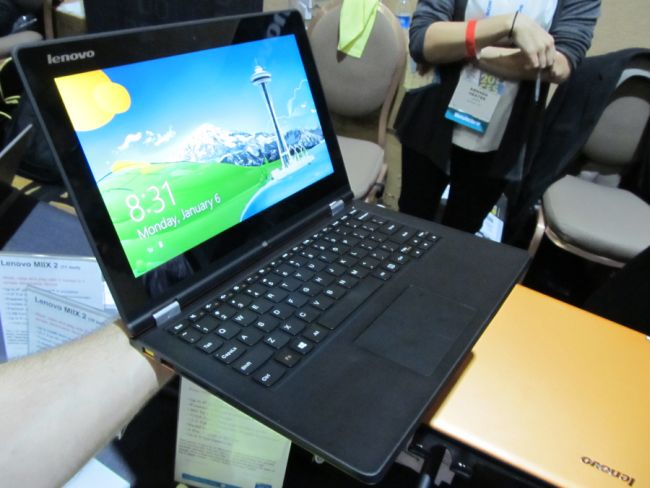 The new Yoga 2 11 is powered by an Intel Pentium N3510 quad-core processor. That chip’s based on the same Bay Trail architecture as the Atom chips in most 8 inch Windows 8 tablets, but it’s a higher power chip, consuming about 7.5W (or a little more than twice as much power during average use), and offering higher performance.

Still, we’re talking about pretty low power consumption, which helped Lenovo design the Yoga 2 11 as a fanless system. What look like two vents on the bottom of the device are actually speakers. Other features include a USB 2.0 port, a USB 3.0 port, a micro HDMI port, and an SD card slot. It has a 1366 x 768 pixel display.

The Yoga 2 11 has 4GB of RAM, supports up to 500GB of storage, measures about 0.67 inches thick and weighs 2.9 pounds. That makes it rather heavy for a tablet, but reasonably light for an 11.6 inch notebook.

Lenovo expects to begin selling the Yoga 2 11 around late February.