Lenovo expects to start selling the Miix 630 in May for about $800 and up, and that price includes a detachable keyboard cover and a pressure-sensitive digital pen.

Oh, and the Miix 630 has a Qualcomm Snapdragon 835 processor, making it one of the first Windows 10 devices with an ARM processor (other upcoming models include the Asus NovaGo and HP Envy x2).

I got a chance to spend a few minutes with the Lenovo Miix 630, and probably the most remarkable thing about this Snapdragon-powered Windows machine is how unremarkable it is. If you didn’t know better, you’d probably think it had an x86 processor. 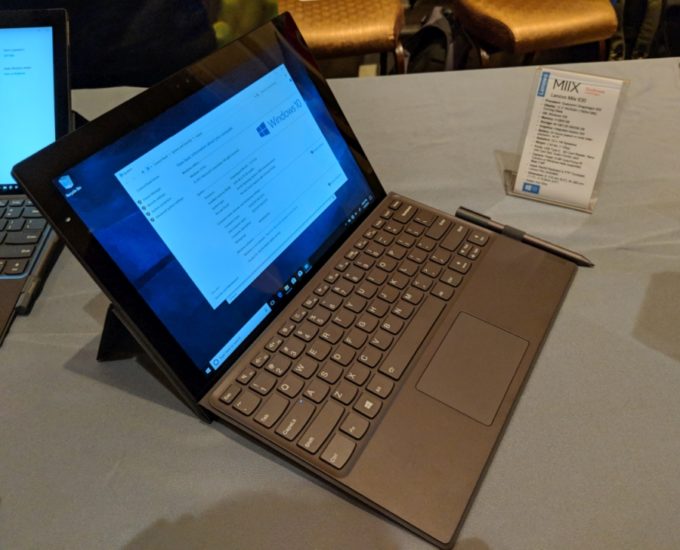 That’s not to say it’s going to go head-to-head with Intel’s 8th-gen Core chips when it comes to raw horsepower. It’ll probably be more competitive with Intel’s lower-power Celeron and Pentium chips like last year’s Apollo Lake or this year’s Gemini Lake processors.

But the use of a Snapdragon 835 chip brings always-connected LTE support, nearly instant wake-from-sleep, and long battery life, among other things.

It’s still a weird trade-off to make though, at a time when Intel-powered laptops and tablets also get all-day battery life and some models sell for significantly less than the $800 Lenovo is planning to charge for the entry-level Miix 630.

But I will say that the pen and keyboard cove that come with the Lenovo Miix 630 are pretty nice. The keyboard cover includes an adjustable kicsktand that holds the tablet firmly in place at a wide range of angles, and the backlit keyboard attaches to the tablet via strong magnets. There’s a loop in the side of the keyboard for storing the pen when it’s not in use, and the pen feels pretty good in the hand.

One thing this tablet doesn’t have is a lot of ports: there’s a single USB Type-C port and an SD card reader. But if you need to plug in a bunch of things at once, I’m sure a hub will do the trick.

There’s a 13MP front-facing camera with support for Windows Hello facial recognition and a 5MP rear camera. The tablet and keyboard combined measure about 0.6 inches thick and weigh about 2.9 pounds. The keyboard cover is rather heavy, so I’d estimate that the tablet alone is maybe half that weight.

Like most the other Windows on ARM devices announced so far, the Lenovo Miix 630 will ship with Windows 10 S. But you’ll be able to upgrade to Windows 10 Pro for free for a limited time. That means you’ll be able to run just about any Windows application on the tablet and not just apps optimized for ARM processors and distributed through the Windows Store. But some x86 applications may run a little more slowly since Windows will have to use emulation to get those apps to function on Qualcomm’s ARM-based processor.

While the demo unit I played with was actually running Windows 10 Pro, it wasn’t connected to the internet and didn’t have many apps installed so I wasn’t able to really delve into its performance. But apps including Edge and Paint 3D loaded quickly, the computer switched between tablet and desktop modes seamlessly, and generally it felt like a Windows 10 computer.

I’m still curious to know what kind of real-world performance Windows devices with Snapdragon 835 processors will offer when it comes to CPU-intensive tasks. But for day-to-day usage including web browsing, document editing, and video playback, I suspect most people probably wouldn’t see much difference between a Windows on ARM device and one with a low-power Intel chip.

Now if only these were priced more like tablets with low-power Intel chips.