Most Windows tablets that have popped up in the last year tended to be on the larger side. There are a few below 11 inches, many 11.6 inchers around, and some 13.3 and 14 on the shelves. It’s easy to understand why this is–Windows 8 tablets are supposed to be just as good for productivity as they are for play.

Thing is, the bigger the tablet the less light and portable it is, so why would you bother carrying it around? Of course, if you go too small then you end up squinting, which isn’t great for getting work done.

Tablets with 8 inch displays seek to hit that Goldilocks zone of compact and portable while still being powerful and large enough for people to get real work done when necessary. Dell’s new Venue 8 Pro is trying for exactly that. 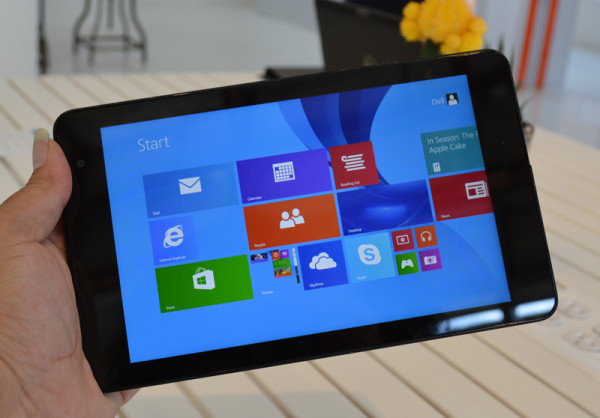 What first struck me about the Venue 8 is the display–the 8-inch, IPS panel is bright, crisp, and beautiful. The 1280 x 800 resolution is pixel dense enough for this size, though not as impressive as the Nexus 7. Good thing the venue doesn’t have to compete with that tablet.

Like the larger Venue 11 Pro, the Venue 8 is comfortable to hold due to the curved edges and overall light weight (0.87 pounds). I really like how it feels in the hand and the texture on the back. It’s possible to wrap a hand around it, even if you have smallish hands, and balances well in portrait and landscape.

The only ports are microSD, microUSB, and a SIM card slot for 4G LTE (optional). There’s no docking connector like the Venue 11 — Dell assumes you won’t connect this up to a monitor when you’re at your desk. The keyboard accessory the company offers connects via Bluetooth. That’s not terrible, but it’s not as speedy or reliable as a physical connection.

Another feature the 8-inch Venue shares with the larger model is stylus compatibility. The active pen is to thick to store inside the tablet when you’re not using it.

The stylus feels like a real pen, glides across the screen well, and should satisfy most people looking to take notes by hand. I wasn’t able to fully test things like palm rejection; stroke recognition worked as well as I’ve seen on other Windows tablets. The technology behind the pen comes from Synaptics, not Wacom, so artists might not be tempted. 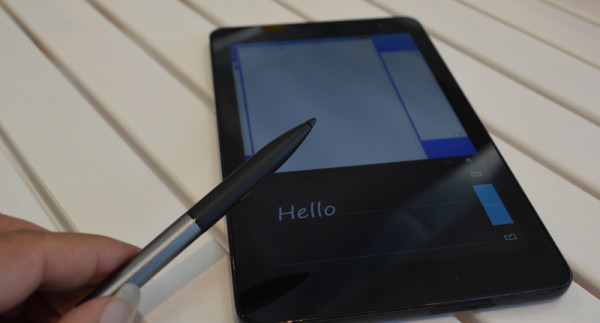 The Bay Trail Intel Atom processor inside means the Venue 8 Pro will likely be pretty snappy yet won’t get hot. Thus the thin profile. I didn’t get a chance to run any robust apps during my hands-on time, but opening apps and switching between them revealed no sluggishness.

With an 8-inch Windows 8.1 (not RT!) tablet with Atom inside you’re inching back toward netbook territory, which I know will make a lot of you happy. The $300 price tag also helps. Just keep in mind that price does not include a keyboard, which will be necessary. Even on a small tablet the Windows keyboard is all in the way.

If an 8-inch Windows 8 tablet is the kind of machine you dream about, the Dell Venue 8 Pro has a chance at winning your heart. On paper, and after a short hands-on time, it looks to have a good deal of potential.