Just ahead of this year’s Dell World the company announced a new 11.6 inch Chromebook, set to come out in January, 2014. As far as Chrome OS machines go, the Dell Chromebook 11 is pretty standard: Celeron 2955U processor, 16GB SSD for storage, 2GB or 4GB of RAM, and 1366 x 768 display resolution.

With HP’s latest Chromebook struggling due to overheating issues Dell might have a chance at snagging a few mainstream shoppers with this one. That’s not the main audience, though; this Chromebook is headed to class. 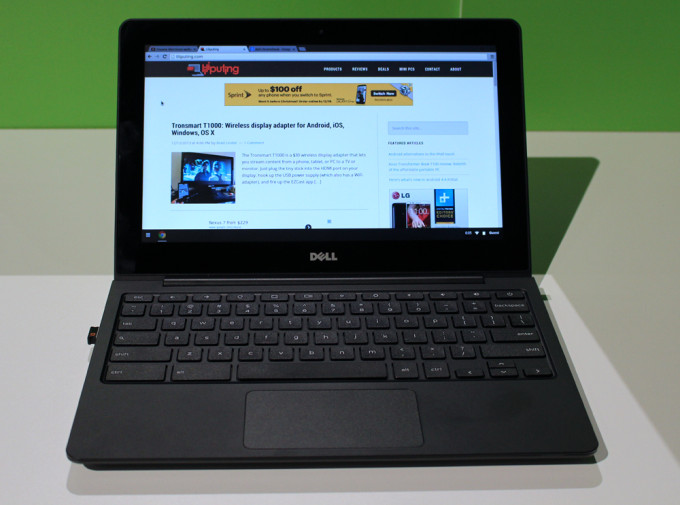 Dell is positioning this laptop specifically for K-12 education markets, something it also did with netbooks a few years ago. The look isn’t meant to catch your eye on a Best Buy shelf (even though it does look like a slight modification on the Windows-powered Inspiron 11 3000 Series notebook, which is a consumer device).

It’s not ugly, it’s just more functional than fashionable. It’s not too heavy at 2.9 pounds but isn’t the lightest nor the thinnest Chromebook around. This size and weight will be easy for even first graders to carry around without starting early on back problems.

The black and gray lid does a good job eschewing fingerprints, even if the only exciting bits are the Dell and Google logos. The deck has a soft-touch coating that also didn’t appear to gather smudges easily. Dell didn’t mention any rugged features and the sides and edges don’t look reinforced. However, given the nature of Chromebooks the loss of one doesn’t mean the loss of data, so they might not need to be as accident-proof as a Windows PC.

The keyboard is pretty average for Dell. The keys have light tactile feedback and are well-spaced so inexperienced/learning typists won’t often accidentally mash multiple keys. There’s a rough matte coating on each key that helps fingers stay on the right one. I was able to get up to my full typing speed right away. And in my hands-on time with the buttonless touchpad I didn’t notice any problems or finickyness.

The 11.6-inch display is a little too glossy and more glare-prone than I prefer. Otherwise it’s bright and the colors look good, plus it has wide viewing angles.

For the intended market, the Chromebook 11 appears to be a solid choice. Firm pricing has not been announced, but Dell says they intend to keep the cost under $300 for the 2GB version. That’s a good deal for a Chromebook, especially if performance holds up. The 4th generation Intel Celeron processor inside is probably powerful enough for Chrome OS, and I didn’t notice any lag when I played with it.

There isn’t much to make this Chromebook stand out from others on the market except Dell’s assurance that it won’t overheat and blow up. That is good to know, though!

Look for the Dell Chromebook 11 on Dell.com in January (probably around the 17th).

14 replies on “Hands-on: Dell Chromebook 11 is intended for the classroom”