The Acer Switch 7 Black Edition is a premium 2-in-1 tablet with an Intel Core i7-8550U quad-core processor, NVIDIA GeForce MX150 graphics, a detachable keyboard, and pen and touch input.

Sure, that’s a lot of money for a tablet, but the Switch 7 Black Edition has a lot going for it including a fanless design, a high-resolution display, and a relatively compact design: the tablet weighs just 2.5 pounds. 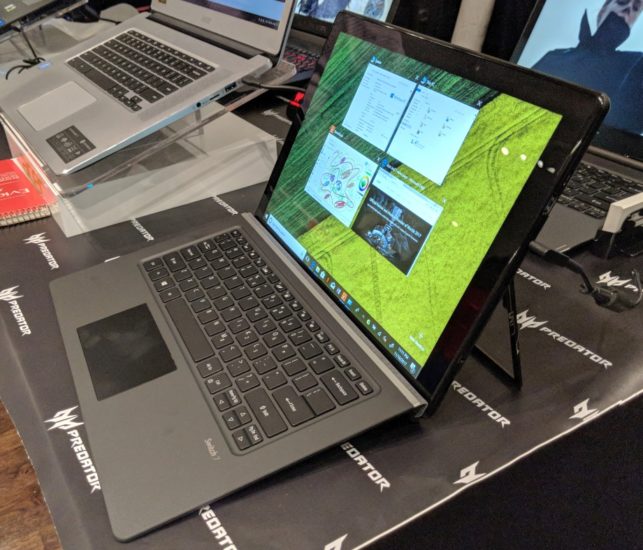 I got a chance to spend a few minutes with a pre-release version of the Switch 7 Black Edition this evening, and while I can’t say much about performance or battery life (Acer says it should last for up to 8 hours on a charge), it does have an attractive design and the 2256 x 1504 pixel display looks pretty sharp.

The tablet also has a few nice touches that make it stand out a bit at a time when every PC maker seems to have a 2-in-1.

The Switch 7 Black Edition’s kickstand automatically pops out when you gently slap the end of the tablet on a table or desk.

The Wacom pen that comes with the tablet supports 4096 levels of pressure sensitivity and allows you to do many of the things you’d do with a mouse when you’re in tablet mode. But unlike a lot of digital pens on the market, this one doesn’t require a battery and you can slide the pen into a slot in the tablet when you’re not using it.

The detachable keyboard cover features backlit keys and has an under-glass fingerprint sensor. Typing feels pretty good, all things considered. But like most keyboard covers you can feel the whole thing squish a bit if you press too hard on the keys. It’s also not going to be quite as easy to balance the Switch 7 Black Edition on your lap as it would be to use a more traditional notebook.

Overall, the Switch 7 Black Edition seems like a promising device that could be competitive with high-end Microsoft Surface Pro tablets. But it’d be nice if there were some lower-specced models with lower starting prices, because even with all of those bonus features, $1699 is a lot of money to spend on a tablet.