Acer’s Spin 5 was one of the first notebooks with a Core i5-8250U processor to hit the streets.

It also demonstrated that Intel’s new 8th-gen Core chips with quad-core processors wouldn’t make laptops more expensive than their counterparts with 7th-gen dual-core chips: the Spin 5 has a starting price of $799, which is pretty reasonable for a compact pound convertible notebook with a full HD display, 8GB of RAM, and 256GB of solid state storage.

I got a chance to check out the Spin 5 in person last night, and while it’s not as svelte as some convertibles, it seems like a pretty decent option if you don’t want to spend upward of $1000 on a laptop. 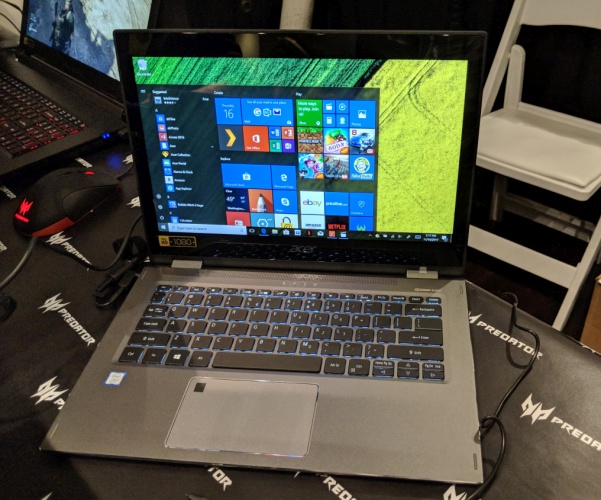 The notebook weighs about 3.3 pounds and measures 0.6 inches thick and works with an optional Acer active pen (which is sold separately).

It has a USB 3.1 Type-C port, a full-sized HDMI port, a headset jack, and three full-sized USB ports (2 x USB 3.0 and 1 x USB 2.0). The laptop has a backlit keyboard with an aluminum finish on the palm rest and around the keys, and a touchpad with an embedded fingerprint sensor.

The laptop feels a little bulky to hold as a tablet, but I suppose it’s nice to have the option. And the sturdy 360-degree hinge allows you to the Spin 5 as a traditional notebook, albeit one that has a screen that you can fold way, way back.

While the Acer Spin 5 isn’t the most attractive laptop with a Kaby Lake-R processor, it seems like a pretty solid machine for folks who want a convertible with Intel’s new quad-core processors, but don’t want to take out a second mortgage to get one.

It’s currently available from Amazon for $790.