But Acer calls its Switch 10 a 4-in-1 device, because you can flip the display around backward for display mode or prop up the system in tent mode. Add tablet and notebook modes, and you’ve got 4.

That might not sound like a big difference, but Acer is betting on the magnetic hinge system in its new tablet to help set it apart… and it’s not a bad bet. The hinge is actually pretty nice. So’s the price: The Acer Switch 10 is expected to hit the streets in late May for around $380 and up. 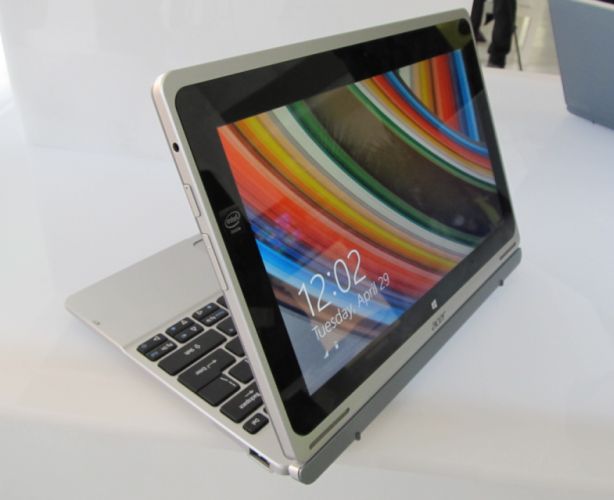 So about that hinge: there are two powerful magnets on the keyboard dock which hold the tablet in place. Give the tablet a hard tug and it’ll pop right out, but the magnets are strong enough to secure the tablet even if you hold the system upside down and give it a little shake.

Between the magnets is the docking port which connects the keyboard to the tablet, and it’s reversible. This lets you snap out the tablet, flip it 180 degrees and pop it back down backward so the screen is facing away from the keyboard.

The keyboard itself is decent… but small. It’s the size of a typical netbook keyboard, so it might take some getting used to if you have large hands (or are used to larger laptops). But for most people it’ll probably only take a few minutes to get up to speed.

The Aspire Switch 10 is powered by an Intel Atom Z3745 Bay Trail quad-core processor and features a 1366 x 768 pixel display with wide viewing angles, 2GB of RAM, and 32GB to 64GB of flash storage. Acer says you should be able to get up to 8 hours of battery life from the built-in battery.

While there’s no extra battery in the keyboard, you do get access to a full-sized USB port when the dock is connected. Acer will also offer an option to pick up a keyboard dock that has a 500GB hard drive built-in for folks that need extra storage.

The tablet has a 2MP front-facing camera, but no rear camera. That makes sense if you think of the Switch 10 more like a notebook than a tablet or a smartphone: You’re more likely to use the camera for video chats than for snapping photos.

The tablet measures about 0.35 inches thick and weighs 1.3 pounds. The dock is about 0.44 inches and 2.6 pounds, while the version with the hard drive is a bit thicker and heavier.

Acer plans to launch the Aspire Switch 10 in America, Europe, the Middle East, and Africa in late May for around $380 or $350 Euros, depending on the market. That will put this multi-mode tablet squarely into the same category as the popular Asus Transformer Book T100, and while I haven’t spent as much time with the Switch as I have with the Transformer T100, it looks like both devices are pretty great tablet/notebook hybrids for the price,