Customers in the market for a pocket-sized Windows PC with a QWERTY keyboard now officially have more choices than they’ve had since the UMPC craze came and went more than a decade ago.

The GPD Pocket 2 is up for pre-order via an Indiegogo crowdfunding campaign, and it should ship later this year. Or you can buy a One Mix Yoga if you want some additional features and don’t mind a slower processor. Or if you’re looking to save money but want an in-between processor option, you can still snag last year’s 1st-gen GPD Pocket. And that’s not even counting gaming-centric handhelds like the GPD Win and Win 2.

I don’t have a first-gen Pocket handy. But I reviewed the One Mix Yoga earlier this year, and GPD just sent me a prototype of the upcoming Pocket 2. So I figured I’d do a little comparison of the two.

Long story short: the Pocket 2 is way faster, but the One Mix Yoga is more versatile. Personally I’d opt for speed if you plan to do any serious work or gaming. But the One Mix Yoga may be a better option if you don’t need a speed demon and have very specific needs.

A year later, we met the GPD Pocket, a handheld computer with a 7 inch display and a QWERTY keyboard that you could actually use for touch typing… with enough practice. The keys are tiny and the layout is a bit odd.

This year GPD started to get some competition when a new company called One Netbook released the One Mix Yoga. It looks a lot like the Pocket, but it features a few bonus features including:

Unfortunately the One Mix Yoga also has a really, really slow processor, which makes the machine rather painful to use for any serious work.

The GPD Pocket 2, meanwhile, has a much faster processor, but lacks the three special features mentioned above. It also has a few design compromises that may be awkward for some users… although I find the keyboard to be slightly easier to type on.

Both laptops have aluminum bodies and both are small enough to slide into a pocket (at least if you have a pair of jeans with fairly large pockets like mine). The Pocket 2 is about half an ounce lighter and 0.15 inches thinner.

That doesn’t sound like much… and it isn’t. But it looks thinner thanks to a tapered design that has the metal on the bottom of the laptop curve upward toward the left, right, and front sides. Stack the two computers on top of one and another and it’s clear that the Pocket 2 isn’t much smaller. But look at them one at a time and it certainly looks smaller.

It also has a lower profile when you open the notebook up, since of the Pocket 2 drops below the base of the computer. The One Mix Yoga lid stays above the base until you push the screen past the 180 degree point to fold the Yoga into tent or tablet modes.

If you’re using the touchscreen, it can be a little tougher to reach up and touch the bottom of the screen on the Pocket 2 because of the way it’s placed behind the body of the computer. But it’s certainly doable.

The Pocket 2 charges via its USB Type-C port, which means that you may need an adapter if you want to charge the computer and connect an external display at the same time.

The GPD Pocket 2 also charges much more quickly. I haven’t run extensive tests of its fast charging, but subjectively it seems to charge at least twice as quickly as the One Mix Yoga. Further research is needed.

The Pocket 2 can get pretty warm during use. There’s a fan that blows hot air out through a large vent in the bottom of the laptop to help keep the system from overheating. It can get rather noisy at times, but there’s also a fan button in the row of keys above the keyboard that lets you silence the fan. Just note that doing so may affect performance.

There are also vents hidden behind the hinge that connects the lid to the body of the laptop. I’m not 100 percent certain, but I think that’s where the speakers are.

One Netbook seems to have gone in the opposite direction: the One Mix Yoga has vents on the back of the laptop and a speaker grill on the bottom. There’s no hardware key to stop the fan, but the fan also doesn’t get as loud in the One Mix Yoga.

Both of these machines have really, really small keyboards. Like, they make the keyboard on the 1st-gen Asus Eee PC netbook look big. Even though that computer had a 7 inch screen, it had massive bezels, providing a lot more room in the chassis for a normal-looking keyboard (even if it wasn’t quite full-sized).

The bezels on the One Mix Yoga and GPD Pocket 2 are pretty small, so GPD and One Netbook had to make some compromises to fit all the usual keys into the keyboard area.

The first one is that neither laptop has a traditional touchpad. Instead, they both have optical touch sensors.

One Netbook put its sensor in the middle of the space bar by the B and N buttons. There are left and right click buttons below it. I find the buttons to be awkwardly placed, but the touch sensor isn’t too bad. Just swipe your finger across it to move the on-screen cursor and you can even tap it to register a left-click.

While I generally prefer the placement and accuracy of the One Mix Yoga touch sensor, the Pocket 2 has one advantage: in addition to tap-to-left-click functionality, you can actually physically click by pushing down on the sensor. You’ll feel it move as you press down. The Yoga sensor doesn’t move at all when you press it. 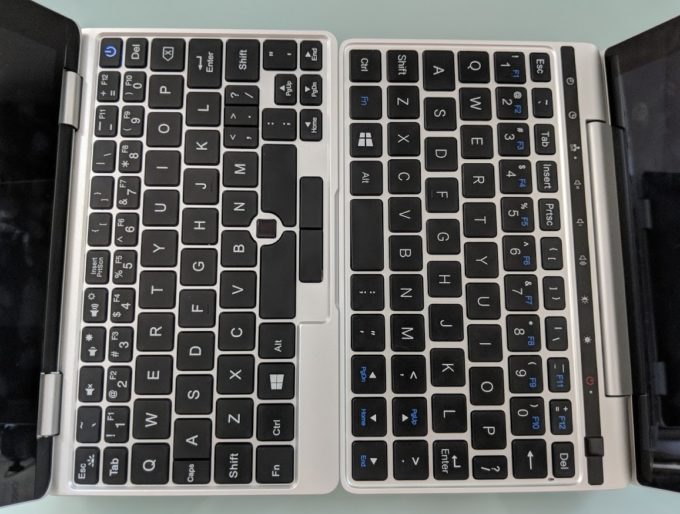 Left: One Mix Yoga / Right: GPD Pocket 2GPD was originally planning to omit the touch sensor altogether on the Pocket 2. The company’s original mockups showed a device with no form of input other than a touchscreen. If you wanted more precise input you could use a capacitive stylus or connect an external mouse. But potential customers didn’t like that idea, so GPD delayed the launch of the Pocket 2 until it could add a touch sensor to the row of special keys above the keyboard and left and right-click buttons on the left side of that row.

I prefer the One Mix Yoga layout. You need to use two hands to use the Pocket 2’s touch sensor and buttons at the same time. And you need to move your hands to the top of the keyboard. The touch sensor also seems also little less precise… but I’m testing a prototype. Hopefully GPD will be able to improve the precision a bit by the time the Pocket 2 ships to customers.

As for the alpha-numeric keys, I find both keyboards a little tough to type on. The keys are small and some keys are in weird positions, like the comma, period, and apostrophe buttons.

That said, I very much prefer typing on the Pocket 2. The keys are spaced a little further apart. There are fewer half-sized keys. The Ctrl button is to the left of the Fn key. And the power button isn’t just another key built into the keyboard, so you’re less likely to accidentally press it when you mean to hit the Del key.

The space bar is a little smaller than I’d like. And I do still have to hunt for infrequently used keys from time to time. But it’s the sort of keyboard you could probably get used to over time. And the travel is a little better than on the One Mix Yoga.

I should note that the prototype GPD sent me has a few mislabeled keys. The key with the tilde label is actually the tab/insert button, for example. And the button labeled Insert is actually the Caps Lock/Print Screen button. I’ve been told this issue will be resolved by the time the Pocket 2 ships

The One Mix Yoga has more functions thanks to its tablet mode (which also includes automatic screen rotation) and active pen support. It also has a backlit keyboard.

It also has a slightly better optical touch sensor experience.

But the One Mix Yoga has a chunkier looking design, an inferior keyboard, and a much slower processor. That last one is the one that approaches deal breaker status for me.

Yes, with a price tag of $450, the One Mix Yoga is cheaper than the GPD Pocket 2, which will have a retail price of $729 and up (or $529 and up during the Indiegogo campaign). But after spending a few weeks with the One Mix Yoga, I found that it was so slow that I never really wanted to use it for anything. It’s a pocket-sized convertible tablet-style notebook that doesn’t really replace a good tablet, notebook, or smartphone.

The GPD Pocket 2, on the other hand, is basically just a laptop with a small screen and a small keyboard. But it’s powerful enough to use for real work. It can run multiple applications or windows at once without slowing down. It transcodes videos in almost half the time. And it can play games that would be non-starters on the One Mix Yoga.

So as I said at the outset, there are now more choices in the handheld PC market than there have been in years. Unfortunately your choice right now boils down do this: an expensive mini PC with decent performance or a cheaper machine with a bunch of bonus features but generally crappy performance.

I’m really hoping that the GPD Pocket 3 and/or One Mix Yoga 2 gives us another option. I’d love a model with the Pocket 2’s processor and the Yoga’s hinge, for instance. But alas, that’s not an option that’s available to us in mid-2018.

If I had to choose? I’d go with the Pocket 2. It may not be able to do all the things the One Mix Yoga can… but it’s powerful enough that it feels like a real computer, and its keyboard is slightly more comfortable to type on.

But both of these are niche devices: either way you’re spending at least $450 on a device that’s far more portable than a typical laptop, but which is far harder to type on and which has a screen that may be too small to let you fit a lot of content on the screen at once, among other things.