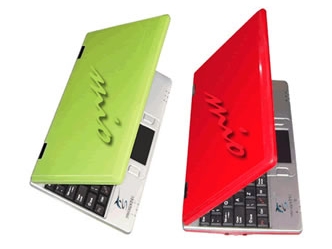 Think that the only new thing PC maker Haleron has up its sleeve is that Ocean OS for netbooks? Think again, because it looks like Haleron has added a dirt cheap Smartbook to its line of mini-laptops.

The Mio Smartbook is a low power devices with a 7 inch display. It sells for $189, although it looks like you have to order 3 or more units, which makes it look like this price may be intended for resellers.

The device has a 266MHz ARM-based processor from VIA and supports 128MB to 256MB of memory. It has 1GB of flash storage space and supports up to 4GB. There’s also an SD card slot and 3 USB ports for adding additional storage or peripherals.

If those specs sound pretty week, that’s because this device basically has the guts of a smartphone. It just happens to be shaped more like a laptop. The Mio Smartbook runs Windows CE 6.0 and gets up to 6 hours of battery life. It features 802.11b/g WiFi, Ethernet, and an optional 3G USB modem. I don’t see any dimensions, but the smartbook weighs about 1.5 pounds.It’s available in red, pink, silver, green, and black.

The product page makes it sound like the laptop could also run Windows XP, Linux, or Android, but that’s simply not true. While Linux and Google Android might be viable operating systems for this device, Windows XP doesn’t run on ARM-based processors. With a glaring error like that on the official web site, all I can say is order at your own risk.