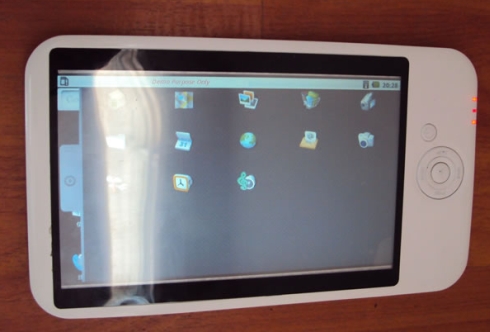 It looks like the HAL comes in two sizes. You can get a version with a 7 inch display or an 8 inch model that looks strikingly similar to a certain Apple tablet that’s due out soon. The 8 inch version will be available in May. Both the 7 and 8 inch models run Google’s Android operating system and include 2 USB ports, mic, headphone, and Ethernet jacks.

The 8 inch model also appears to have a SIM card slot for an optional 3G modem.

Update: I should point out that Haleron says the tablet is now shipping. But I’ve never read a single product review of a Haleron product, despite the fact that the company says it has released several netbooks, a smartbook, and now a tablet over the past year or two. I’ve reached out to Haleron several times to see if I can get a demo unit for review, but have yet to receive one. So place orders with caution — and if you have ever purchased a Haleron product, please let us know in the comments. I’m certainly hoping that this is a real product and not just a scam.