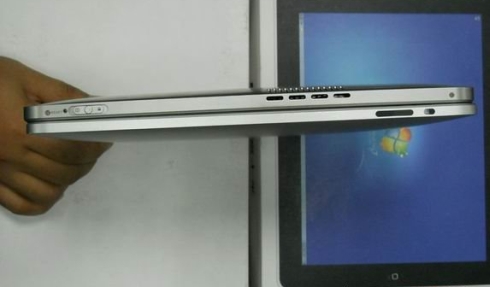 Over the past year or so we’ve seen a number of cheap Chinese tablets running Windows and designed to look like an oversized iPhone. In fact, these iPhone-clonesque tablets were coming out even before Apple officially unveiled the iPad — which looks a bit like an iPhone, but which has its own distinctive design elements. So it was really only a matter of time before we started to see true iPad clones, like the Haleron H97.

The H97 looks exactly like an iPad — until you hit the power button. It has the same home button at the bottom of the display, curved design on the back, and minimal design — or at least that’s how it looks in the press shots.

On the other hand, the specs list VGA, DVI, and HDMI outputs, 4 USB 2.0 ports, mic and headphone jacks, and an optional Ethernet adapter. I don’t know if Haleron isn’t showing everything in it’s rendered images, the company is hiding all those ports on the bottom — which you can’t see in the images, or if the specs are wrong. I’m also not sure you could fit those ports on an iPad — it’s just not thick enough.

The H97 is reportedly a bit thicker than the iPad though. The former measures about 0.6 inches thick while the iPad is 0.5 inches.

Rounding out the Haleron H97 specs are a 9.7 inch 1024 x 768 pixel capacitive multitouch display, a 2GHz Intel Atom Z550 CPU, 1GB of RAM, Windows 7 Home Premium, Intel graphics, WiFi, Bluetooth, and optional 3G. It also has a VGA webcam — which I don’t see on the press images (which look suspiciously like someone Photoshopped a Windows 7 logo on an iPad). The H97 has a 4500mAh battery.The tablet will also be able to run Linux, Google Android, and Chromium OS.

It’s expected to start shipping to distributors in December. Haleron won’t be selling the computer directly to consumers, and will only deliver shipments of 10 or more units.

Update: Haleron has posted a new photo (shown above), which shows how the H97 compares to the actual iPad. It’s definitely a bit thicker — and has vents on the side. But it’s still pretty slim for a tablet.

7 replies on “Haleron H97: Windows 7 tablet with an iPad-like case”