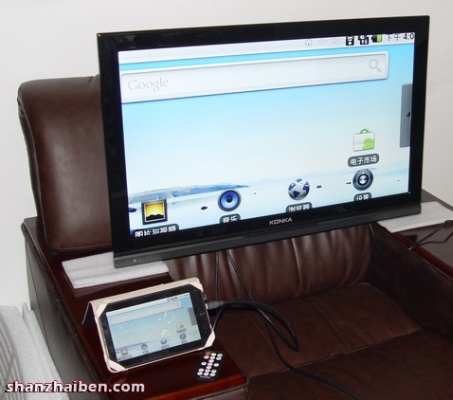 There are plenty of apps that let you turn an Android smartphone or tablet into a remote control for your computer by sending commands to VLC, Boxee, Winamp, or other media applications over a WiFi connection. But the Haipad M701R is one of the first Android tablets I’ve seen that actually comes with its own remote control for controlling media playback on the tablet itself.

At first, the idea of using a handheld device to control another handheld device seems a bit silly. But when you consider the fact that the Haipad M701R actually has an HDMI output, it starts to make sense, since you could plug the tablet into a TV and stick it on our TV stnad and then control your video playback form the comfort of your couch using the remote control.

The Haipad M701 is basically the same machine as the WiiPad I took a first look at last month. If you’ve been wondering where the complete review is… you might have to keep wondering for a while. While the tablet has better hardware than many cheap Chinese tablets I’ve tested, the tech support isn’t so great, and after trying to apply a firmware update, I spent the last two weeks with a mostly useless tablet running a Chinese version of Android 2.1. I just got it back to English last night.

Anyway, back to the Haipad M701, it has a Telechips TCC8902 processor, a g-sensor, and a resisitve touchscreen which can recognize multitouch gestures. It runs Google android 2.1 and can handle HD video playback. The M701 has been making the rounds for a while, but the M701R appears to be a new version with support for the included remote control.

You can check out a demo video from Shanzhaiben after the break.

5 replies on “Haipad M701R: Android tablet with a remote control”