This weekend the HAIKI team released HAIKU R1 Beta 1, which is kind of a big deal when you consider that the last major release of the operating system came in November, 2012.

I took a look at HAIKU a few months ago when it became clear that the new beta was on the way. Now it’s here, and HAIKU R1 brings a bunch of significant updates. 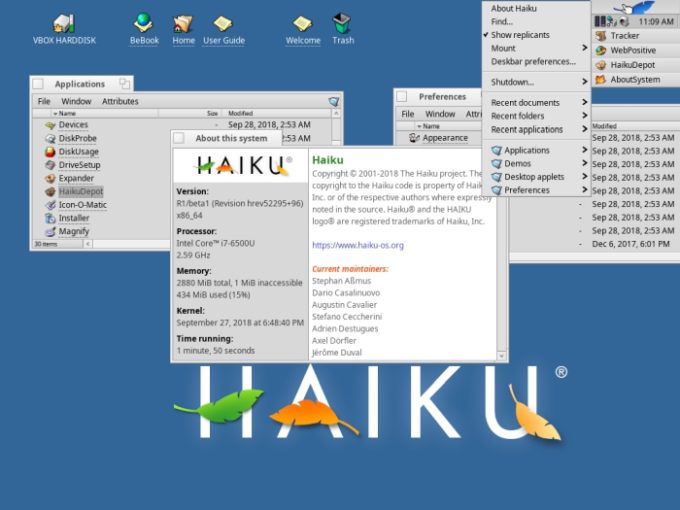 First and foremost, there’s now a package management system that makes it easy to search for and install third-party applications.

At first glance, it looks a lot like the kind of package manager commonly found in GNU/Linux operating systems. But HAIKU handles things differently: each package is actually a compressed filesystem image. Instead of “installing” an application, what you’re actually doing is “activating” them by mounting the image.

One advantage to this sort of system is it takes nearly no time to install or uninstall an application — all you’re doing is moving the file from one directory to another. Another is that it’s possible to boot into a previous package state if an update causes problems or to blacklist specific files from loading upon boot.

You can use the HaikuDeport package manager if you prefer a graphical user interface, or fire up a terminal window and use the pkgman utility for a command-line version.

Other changes include an improved version of the WebPositive web browser, an updated network utility, user interface improvements, support for streaming media using the MediaPlayer app, and support for EFI bootloaders.

There are also updated drivers, experimental support for Bluetooth (in nightly builds only) and a whole bunch of code cleanups.