Haiku is an open source operating system designed to be compatible with applications developed for BeOS, an old school operating system that was acquired by Palm in 2001 and then largely abandoned.

The first alpha version of Haiku was released in 2002, and the last official alpha was released in 2012. But development of the operating system is ongoing, and the Haiku team hopes to launch the first beta release by the end of the year.

Until then you can download nightly 32-bit or 64-bit builds or check out the latest monthly activity report to see what’s new. Among other things, the team is working on kernel, driver, and bootloader updates. But last month’s report pointed out something pretty cool: a port of the popular free and open source office suite LibreOffice. 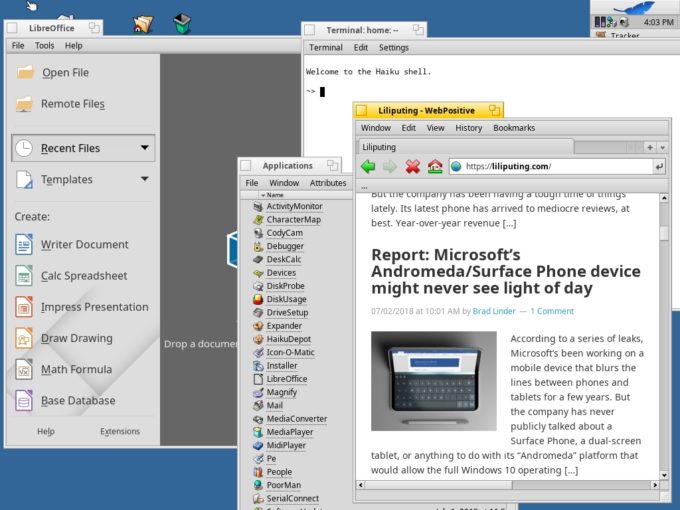 I installed the latest nightly build of Haiku OS in a virtual machine and I was impressed at how quickly the operating system loaded and how responsive applications were.

The operating system has a pretty barebones look by modern desktop standards. But since it’s designed to be compatible with a nearly 20-year-old operating system, it’s optimized for old hardware and runs pretty nicely on modern machines.

Haiku comes with some basic apps pre-installed including a web browser, media player, file manager, sound recorder, calculator, and email utility. It supports workspaces for multiple virtual desktops, and the Haiku Depot utility is a package manager that lets you search for and install third-party apps… now including LibreOffice 6.

For the most part LibreOffice on Haiku works like LibreOffice for other platforms including Windows and Linux. But the first time you load the application it will close after a few seconds. It works fine after that. And there are a few other oddities: you cannot change the font, most of the user interface ignores Haiku/BeOS native design elements, and there may be some rendering issues.

via Hacker News and Phoronix