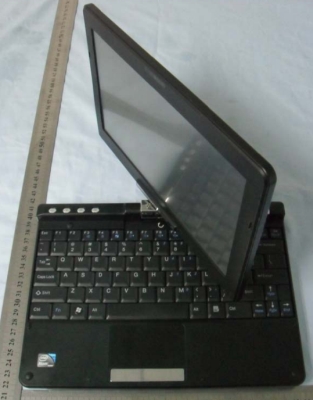 It’s been 7 months since I first spotted Haier’s X220 10 inch convertible tablet at CES. At the time, I was told that the company planned to sell it in the US, but I was starting to have my doubts. Now the folks at Wireless Goodness have spotted a listing for the Haier X220P at the FCC web site, which is often a good indication that a product is scheduled to hit the US in the not-too-distant future.

According to the FCC filing, the X220P features a 10.1 inch, 1024 x 600 pixel touchscreen display, 802.11b/g/n WiFi, a 3G modem, 1GB of RAM and a 160GB hard drive. The computer runs Windows XP or Linux. It has an Intel Atom processor, and while the FCC documents don’t make it clear which Atom CPU we’re talking about, the model I saw earlier this year had a 1.6GHz Intel Atom N270 processor.

Unlike many of the tablets expected to hit the market this year, the Haier X220P features a QWERTY keyboard and a swivel design that lets you fold the screen down over the keyboard for use in tablet mode. It weighs about 3 pounds.

2 replies on “Haier convertible tablet-style netbook heading to the US?”