Amazon’s Fire tablet is probably one of the best tablets you can buy for $50… and on Thanksgiving weekend Amazon is selling it for just $35, which makes it an even better bargain.

Update: This article was originally published in 2015, and while some of the tips below are still useful, Amazon has released several software updates… and users have found several new ways to hack the tablet.

So check out our late 2016 roundup of tips and tricks for Playing with Fire: Hacking Amazon’s $50 Fire tablet.  You can also check out the Fire Tablet section at the xda-developers forum for more details about the latest custom ROMs, root methods, and other hacks. 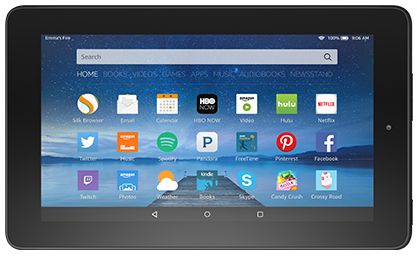 The 7 inch tablet may not have an HD display or stereo speakers, but it supports WiFi and Bluetooth, has front and rear cameras, features a quad-core processor, and has an IPS display with wide viewing angles. It’s one of Amazon’s first tablets to have a microSD card slot for removable storage. And unlike most other tablets in its price range, the Fire tablet comes from a company with a reputation for offering software updates and customer service.

There’s just one catch: the tablet runs Fire OS, which is Amazon’s custom version of Android with tight integration with Amazon’s app, music, video, and eBook stores. Don’t like Fire OS? No problem: there are a number of ways to hack this tablet to make it function more like a standard Android device.

Just want to install the Google Play Store and Google Services Framework so you can run apps that aren’t available from the Amazon Appstore? There’s a method for sideloading the required apps. It will also disable automatic updates so that Amazon can’t push a software update that will disable the feature without your knowledge. That may be a good thing or a bad thing, depending on how you plan to use the tablet.

You can also replace the Amazon home screen/app launcher with something that looks more like the stock Android launcher.

Want to install third-party apps that require root access or load the Xposed Framework so you can modify the behavior of the operating system? Then you can root the Fire tablet.

This allows you to modify files and settings that are normally protected.

Want to take the nuclear option and opt to use a different version of Android than Fire OS? The first step involves installing a custom recovery like TWRP or Amazon Fire Cyanogen Recovery.

This allows you to make a complete backup of your device or flash updates including the tools that would let you root or install the Google Play Store on the tablet. It also lets you completely wipe your device and load custom firmware to replace Fire OS.

Some of the first custom ROMs for the Fire tablet include builds of CyanogenMod 12.1 and SlimLP, which are both based on Android 5.1 Lollipop. Note that while these ROMs will make the Fire Tablet act more like a traditional Android tablet, they’ll also keep you from accessing some Amazon features such as the Kindle Owners Lending Library, which allows Amazon Prime members to borrow and read one eBook a month.