Released in 2006, the Nintendo DS Lite is a handheld game console with two displays but no official support for sending video to a TV or external display. Unofficially though? A group of hackers have found a way to do just that.

What’s interesting about the Nintendo DS-TV-Out Restoration Project from the folks at Lost Nintendo History is that while it does require a bit of extra hardware, the bulk of the work is done by software that enables a hidden feature that’s built into the Nintendo DS Lite’s system-on-a-chip: it already has built-in support for video output. 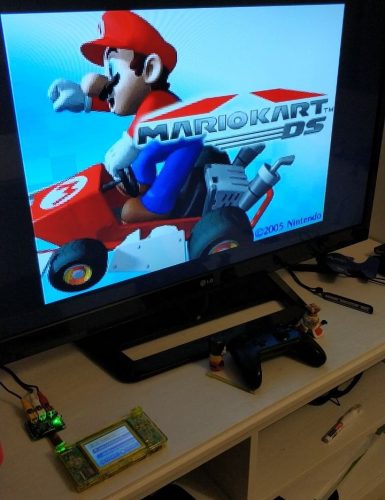 This feature appears to be unique to the Nintendo DS Lite. It’s not present in any other version of the Nintendo DS, and it’s not exactly easy to spot – there’s a reason nobody else seems to have added TV output to this little game system in the past 15 years.

Normally support for video output to external devices is disabled during the boot process. The DS-TV-Restoration Project uses custom firmware to keep it enabled and a custom printed circuit board with a digital to analogue converter that can translate the video from the DS Lite into a signal that can be sent to a TV using a composite video cable.

Among other things, the team’s software would allow you to troubleshoot or continue using a Nintendo DS Lite if one of it’s displays are broken by letting you send the signal from the upper or lower screen to the TV. But it’s also just a pretty impressive feat of reverse engineering.

It’s unclear why this particular handheld game console had any sort of of TV out support while other members of the Nintendo DS family did not. But it wouldn’t be until the Nintendo Switch was released in 2017 that Nintendo officially supported using the same device for handheld and TV gaming.

via Hacker News and GBATEMP