But that doesn’t mean you can attach peripherals directly to the PCIe interface… or does it?

Tomasz Mloduchowski wanted to see if it was possible to expose the interface, and it turns out that it is… although I’m not sure how useful this hack would be for most users. 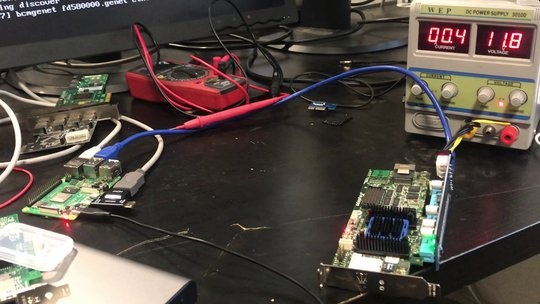 The hack involved desoldering a VIA VL805 chip from the motherboard to expose the bus, attaching a PCIe riser, and connecting a compatible controller.

When all is said and done, it’s possible to connect peripherals directly to the PCIe bus.

That said, in most case you’re probably going to be better off just plugging hardware into the USB 3.0 ports. You can easily connect a USB hard drive or SSD that way if you want more storage (or faster storage) than you would get from a microSD card. And exposing the PCIe interface only gives you a single lane — which isn’t enough to hook up something like a graphics card.

Still, it’s impressive to see that it can be done.

via Hackster.io and Tom’s Hardware