The Barnes & Noble NOOK Simple Touch is an eBook reader with a 6 inch E Ink display and a touchscreen. Like most devices with a black and white E Ink display, the NOOK Touch is designed for reading and not much else. While the display can handle text and images, the slow screen refresh rates limits the types of games and videos that you can run. 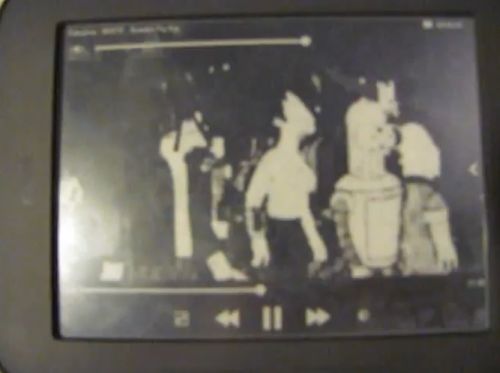 But we’ve seen users hack the NOOK Touch to speed up the screen refresh rate… and it turns out the tablet can even handle video.

You’d never know it by looking at the default user interface, but the NOOK Tablet is running a modified version of Google Android. By rooting the device it’s possible to run Android apps — including a video player, which is exactly what at least one person has done:

The video shows a 3gp playing in the Mobo Video Player Pro app for Android.

Clearly the video quality isn’t as good as it would be on a device with a faster processor… or a color display.

Playing videos will also probably reduce your battery life — while E Ink tablets can get weeks or run time from relatively small batteries, that’s because normally the most taxing thing the CPU and display have to do is flip from one eBook page to another.

via The Digital Reader and xda-developers