The Google Nexus Q is a $299 device for streaming media from the Google Play Store to a television. Out of the box, it doesn’t have a user interface. Instead, you plug it into your TV and then use an app on your Android phone or tablet to choose music, movies or other content you want to play.

But under the hood the Nexus Q has a TI OMAP 4 dual core processor, 16GB of storage, and Google Android 4.0 software.

We’ve already seen that it’s possible to install and run third party Android apps on the Nexus Q — but up until recently users have been doing that the hard way by pushing commands to the tablet using a command-line interface from a PC. 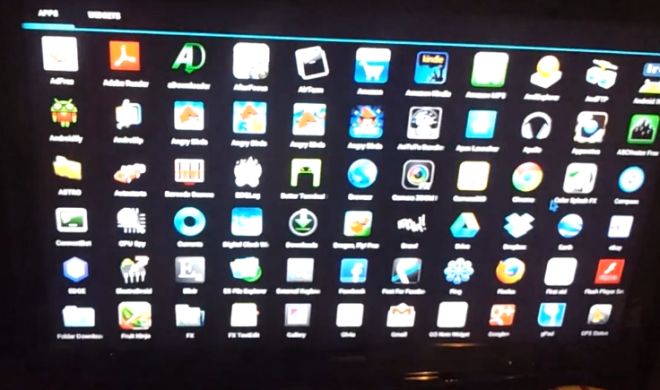 This lets you see a list of installed apps and launch any app by clicking on it… which you can do if you plug in a USB or wireless mouse.

Installing an Android launcher app like Trebuchet won’t give you on-screen back, home, or recent apps buttons. But you can use a keyboard to access those functions.

In other words, if you root the Nexus Q, install an app launcher, plug in a keyboard, mouse, and TV, you can basically turn the device into a $299 (plus accessories) Android-powered PC.

Unfortunately you still need to connect to the Nexus Q over ADB and issue one command to launch the app launcher in the first place.

Or you could spend $80 or less and pick up an MK802 or similar Chinese Android Mini PC. The difference is that the Nexus Q has a faster dual core processor, more storage, and it’s an official Google device.

For a product that’s officially positioned as a media streaming device, the Nexus Q is turning out to be pretty versatile. But that’s not surprising. Google provided about 6,000 of the devices to developers at the Google I/O conference last month and encouraged them to hack the Nexus Q to make it more useful.