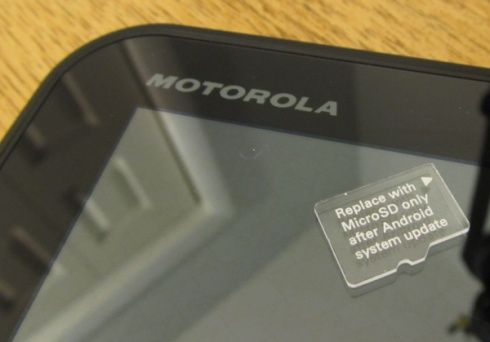 Motorola XOOM users recently received a software update which brings Android 3.1 to their tablets. The software update offers better OpenGL graphics performance, an improved task switcher, and resizeable home screen widgets, among other things. But one thing it does not offer is a fix for the broken microSD card slot. Motorola has been selling the XOOM since February, but so far every unit that has shipped has had a non-working SD card slot.

Fortunately a group of independent developers have found a fix.

Xda-developers forum member publicanimal has posted instructions for applying a custom software update that gives you root access to Android 3.1 on the XOOM, and also allows the tablet to read SD cards. This isn’t the first SD card hack for the XOOM, but it’s designed specifically for the rooted WiFi-only models of the tablet.

One of the best parts is that if everything works properly, you should be able to apply this unofficial update without erasing any data on your device — but when running officially unsupported software you’re always taking a risk, so make sure to backup any important data before you get started.

2 replies on “Hack enables the SD card slot on the Motorola XOOM WiFi with Android 3.1”