Habey generally makes computers and electronic equipment for industrial use. But the Habey BIS-6922 looks like a small form-factor PC that’d fit comfortably on your desk or in your home theater setup.

It’s a 9.6″ x 6.1″ x 2.1″ computer with a passive cooling system, which means it doesn’t require a fan to keep the CPU cool. But that doesn’t mean the computer doesn’t pack a punch. It can handle Intel Sandy Bridge or Ivy Bridge processors. 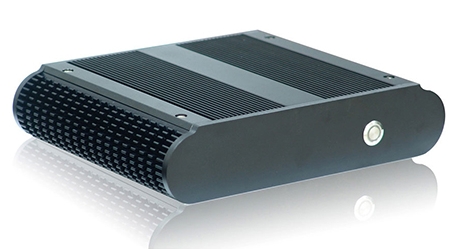 The Habey BIS-6922 supports 2nd or 3rd generation Intel Core i3, Core i5, or Core i7 processors. It also has two RAM slots for up to 8GB of total memory, a 2.5 inch hard drive bay, and a few PCIe and mini PCIe expansion ports.

On the back of the system you’ll find HDMI, DVI, VGA, and serial ports, mic, headphone, and line jacks, 2 Ethernet jacks, and 4 USB 2.0 ports.

You can use the multiple video outputs to hook up dual monitors.

There’s no built-in WiFi, but you should be able to add a simple USB dongle to add support for wireless networking.

There’s no word on pricing… you’ll have to call Habey to get a quote. Every now and again the company’s products do make it into retail stores — but the only models I’ve seen recently have been Habey’s Intel Atom-powered computers such as the BIS-6564 and BIS-6563, which you can pick up from Newegg for $300 or less.

I suspect the new models will carry higher price tags.