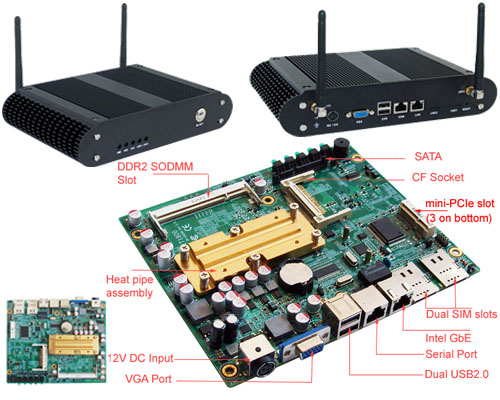 Habey USA, a design and manufacturing company in the industrial PC field, has unveiled a new embedded computer system called the Habey WIT-1800. Providing a power efficient fan-less design based on Intel’s ATOM N450 and D410 processors plus a ICH8M South Bridge instead of the standard NM10 Express chipset.  The most prominent feature is the inclusion of  four built-in mini-PCIe slots and two on board rear accessible SIM sockets that enables the system to support up to two 3G mini-PCIe modules for dual 3G wireless communication as well as WiFi, SSD  (in addition to the normal HDD/SSD 2.5″ SATA interface option) and other mini-PCIe devices.

The standard interfaces for both versions of the WIT-1800 include one serial port, two USB 2.0 ports, one Intel 82574 Gigabit Ethernet port, one SATA port, one CF socket and two SMA sockets for 3G antennas. The compact fanless enclosure is based on HABEY’s highly efficient ICEFIN™ proprietary thermal design.  While the single VGA port will support either up to 2048×1536 (with the Atom D410 CPU) or up to 1400×1050 (N450) resolutions.

Comparatively, the overall look of the WIT-1800 has a more industrial/business looking design than the recently launched Habey ENT-6564 multimedia NG-ION nettop, but is aptly designed for it’s intended niche market use in mobile fields and in-vehicle applications.  While maintaining a very compact design with a range of flexibility that is rarely seen in such small computer systems.

Pricing and availability have yet to be announced.