The Raspberry Pi 2 isn’t the only new single-board computer hitting the streets soon. Merrii has introduced a new developer board called the H88 Hummingbird.

It packs a lot more power than the Raspberry Pi 2, but it’ll also probably cost a lot more (pricing hasn’t been announced yet). 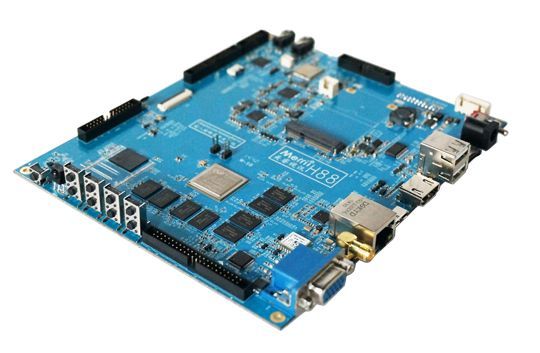 The H88 Hummingbird features an Allwinner A80 octa-core processor, 4GB of RAM, and 8GB of built-in storage.

The system has a USB 3.0 port, two USB 2.0 ports, a mni PCIe slot, an IR receiver, a CSI camera connector, and a GPIO, UART, SPI, I2C, and other developer-friendly features.

Merrii says the system should be able to support Android 4.4 KitKat or Linux.

While I haven’t tested this particular unit, I did run some benchmarks on another device with an Allwinner A80 CPU recently. It performs almost a swell as the NVIDIA Tegra K1 processor used in the Google Nexus 9 tablet in some tests, although it falls far behind the NVIDIA chips in tests that rely heavily on graphics performance.

4 replies on “H88 Hummingbird dev board: 4GB of RAM and Allwinner A80”