Lenovo’s Yoga Book line of dual-screen laptops challenge the idea of what makes a laptop computer by replacing the keyboard with a second screen (that you can also use to type).

The Gemini from GST Communications goes a bit further… or maybe not far enough.

The Chinese company has launched a crowdfunding campaign for a device that GST calls a “dual-screen laptop.” But really, it’s just two tablets designed to work with one another.

Update 8/22/2019: The Gemini Indiegogo campaign has been suspended (at least temporarily) and it’s described as “under review,” with no new contributions being accepted at this time.

Update 8/25/2019: GST Communications explained to Liliputing that the crowdfunding campaign was not actually initiated by GST, but rather by a third party using their name without permission. GST reached out to Indiegogo, which canceled the campaign due to the fraud allegation.

Update 10/01/2019: The Gemini crowdfunding campaign has resumed, although the company behind the product is now listed as “Gemini” rather than GST Communications. The GSTGetMini website is also now offline.

Our original article continues below. 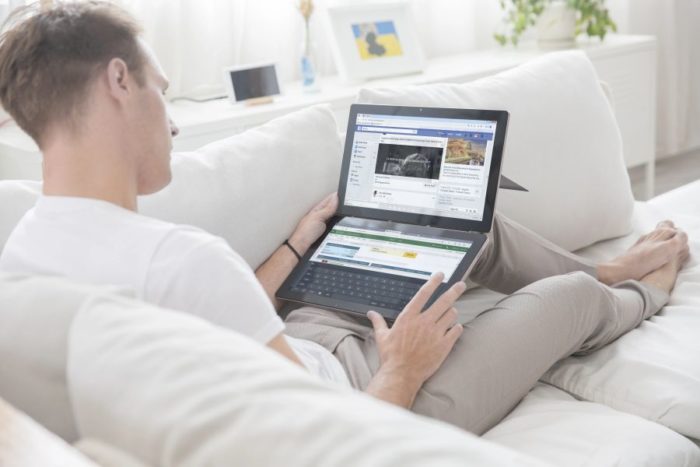 Here’s what GST is promising: you buy two Windows tablets and you can use them in a variety of ways:

That’s the idea anyway. It’s a little unclear what GST’s “proprietary software” is that allows you to use two tablets together as a single device. But responding to comments, the company gives a little more information.

For one thing, when the two tablets are connected, CPU resources will be shared between two units to optimize performance and battery life. So a task that starts running on one tablet may theoretically move to the other… or something.

And if you were hoping to use one of these tablets as a monitor for an existing laptop, tablet, or desktop computer, you can do that… but you’ll need a USB Type-C hub, dock, or dongle with HDMI output.

Meanwhile, the company has released a few videos showing the “proprietary software” in action and… the experience doesn’t look quite as smooth as moving content around an extended desktop when using a truly dual-screen setup (like a laptop + HDMI monitor).

It’s also worth noting that this is GST’s first crowdfunding campaign, and the goal was intentionally set very low, at just $30,000. The company says it’s using crowdfunding to raise awareness rather than to raise the money necessary to manufacture their not-really-a-laptop. But I’d suggest proceeding with caution.

Anyway, as for the latest Gemini, the dual-screen laptop/tablet thingamajig is said to be available in several different sizes and configurations:

Note that those prices are during the crowdfunding campaign only, with limited quantities available at each price. Eventually the company says retail prices will be about twice as much.

And keep in mind, what you’re getting for that money is two tablets with identical specs… assuming the tablets ship as promised in March, 2020.

Other features are said to include USB 3.1 Gen 2 Type-C ports, headset jacks, and microSD card readers, quad speakers, dual microphones, 8MP rear and 5MP front cameras, and an aluminum body. The tablets are actively cooled (which means they’re not fanless).

GST says the tablets have a starting weight of about 1.65 pounds each, or 3.3 pounds when used together to make a “laptop.”