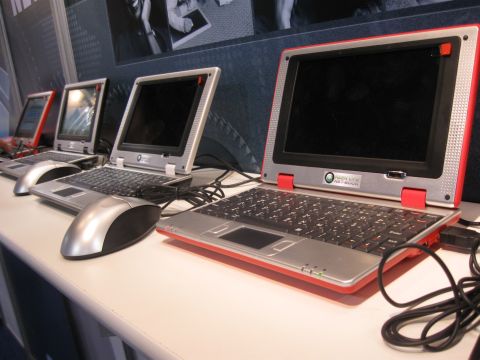 King Yun Electronics is a Chinese company with a netbook to sell. Not  to you, but to any distributor interesting in picking up the brand. The company is pushing three netbook models under the Green Life name at CES.

This netbook bears a striking resemblance to the machine produced by Exon Technology which is sold under the 3K Razorbook, Bestlink Alpha 400, and dozens of other names. But the King Yung reps I spoke with say this is their own machine that was designed in house. The Linux interface does look a bit different from the software I’d seen on similar netbooks. But it’s possible that this mini-laptop was built around the Exon reference design and then King Yung put their own custom software on it.

You can check out a video showing the user interface after the jump. There’s also information on the other two Green Life netbooks. So click the read more link already, would you?

The measurements on the spec sheet are exactly the same as those on the G 400, which is funny because this model looks just a bit chunkier. That could be an optical illusion though, since the G 500 has rounded edges that actually make the laptop look a little more toy-like than the G 400.

G  800: The final model is the only netbook in the bunch with an x86 processor, which means it’s the only version that’s capable of running Windows. The company is still making it available with the same Linux distribution found on the other models though.