Google is already a major buyer of renewable electricity from sources including wind and solar facilities. In 2017 the company says all of its operations will be fueled by renewable energy thanks to deals to purchase 2.6 gigawatts of wind an solar energy. 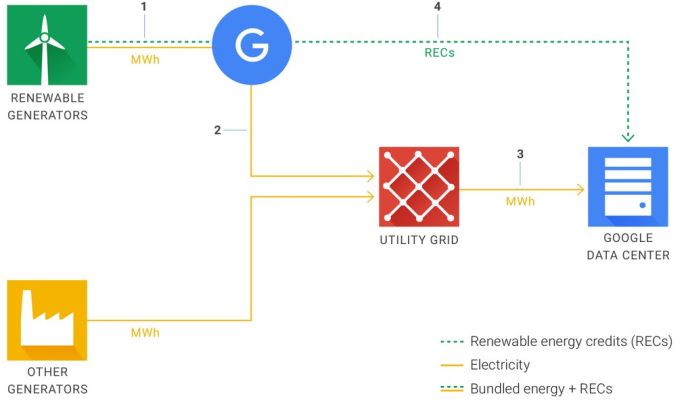 In other word, the electricity Google uses may come from a mix of wind, solar, coal, nuclear, hydroelectric, and natural gas. But that doesn’t mean Google’s commitment to renewable energy is pointless. Instead, the company is paying solar power plants and wind farms to produce enough energy to offset the electricity used by the company… which means that the company is funding renewable energy production and cutting demand for power from other sources.

Not only does the move reduce Google’s carbon footprint and help ensure that the company’s massive electric bill doesn’t contribute to greenhouse gas emissions and global warming, but it also helps bring down the price of renewable energy for everyone by providing incentive for wind and solar plants to ramp up production.

Google officials also say that investing in renewable energy makes sense because prices for wind power tend to be more stable than those for other power sources, which makes long-term planning and budgeting easier.