Graphicly provides a platform for digital comic books and other graphic works such as magazines and children’s books. Up until recently the company was probably best known for offering a series of apps for iOS, Android, and desktop computers that allowed you to read comic books.

But today Graphicly announced that it’s retiring those apps. Instead, the company will focus on offering tools that allow writers and artists to sell their works through the Kindle, NOOK, and iBooks stores, among other places. 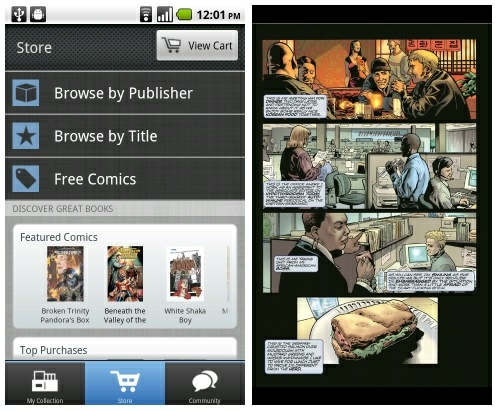 In other words, Graphicly basically wants to get out of the store business and instead focus on providing artists with the tools to publish their works.

Authors can use Graphicly’s tools to upload their works once and make them available on multiple paltforms including the Kindle, iPhone, iPad, NOOK Color, NOOK Tablet, Kobo VOX, and other Android phones and tablets.

For readers, the idea is that you can still access the works — but you won’t have to use a Graphicly app to do it anymore. You can just browse the Kindle Store, iBooks store, or other marketplace.

But you won’t be able to download those apps anymore — which could be a problem if you decide to upgrade to a new tablet in the future.

This is the problem with purchasing content that’s tied to a specific format backed by a startup. In one way, that’s why it’s good to know that Graphicly’s future publications will be available in EPUB, PDF, Kindle Format 8 and other standards backed by companies that aren’t likely to go out of business right away.

But it’s kind of bad news for anyone who has already sunk a lot of money into comic book issues using Graphicly’s older platform, because it means that it will be tough to take them with you when you switch to your next phone or tablet.

Meanwhile rival ComiXology has released a major update to its comic book store/reading app for Android with a new user interface, faster performance, and support for downloading books in the background.

ComiXology is probably the biggest name in digital comics for Android and iOS at the moment, so there’s slightly less chance of the company pivoting and abandoning its mobile apps. But proceed with caution.