GraalPhone is showing off a concept modular devices at CES this week. It consists of two parts: a small Windows laptop with a 7 inch display that can also be positioned so that it rests on top of the keyboard for use in tablet mode, and an Android smartphone that slides into a slot in the computer.

The idea is that you can use the Android phone or Windows computer as standalone devices. But as soon as you insert the phone, it turns the system into a 7 inch Android tablet.

GraalPhone is showing off a pretty slick design prototype at CES, but unfortunately the software isn’t ready for a public demonstration yet. 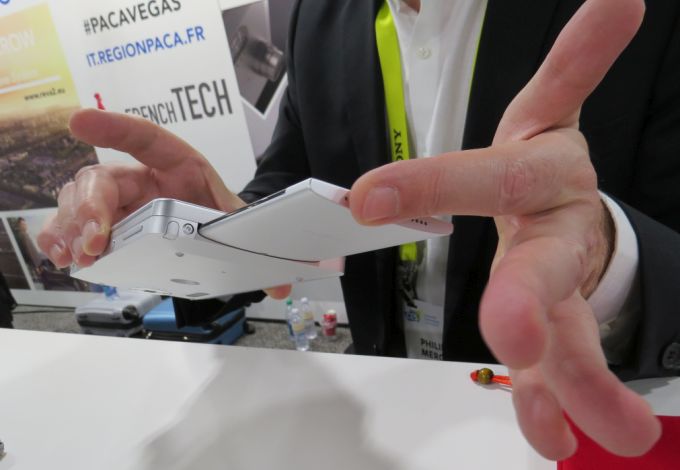 The company says a finished product could be available in late 2017 or early 2018 and it would likely sell for around 800 to 1000 Euros, which would make the GraalPhone system kind of pricey for a phone, but potentially cheaper than buying a phone, a tablet, and a laptop.

But Graalphone is also taking meetings with bigger companies at CES, and a representatives tells me that some have mentioned their interest in the company’s intellectual property. So instead of selling its own products, it’s possible GraalPhone could license its patents to another company who would sell something similar under a different name.

GraalPhone calls the system a 4-in-1 device because it functions as a phone, a tablet, a laptop, and a 3D camera. That last one comes from the fact that the laptop dock has a camera with an optical zoom lens… but there’s also a hole in the case so that when the Android phone is inserted, you have a dual-lens camera system, allowing you to take stereoscopic 3D images.

The trickiest part of this system isn’t necessarily designing the physical case prototype that’s on display right now, though. It’s making sure the Android and Windows software works together properly and making sure that the processor, memory, storage, battery, and other hardware is all up to the task of powering this multi-function device.

It’s a promising concept. But right now it’s little more than a concept.

22 replies on “GraalPhone concept is a modular smartphone, laptop, tablet, and 3D camera”