This week GPD announced it’s giving the GPD Win 2 handheld gaming PC a spec bump that includes a newer processor and more storage. But the company is also working on a next-gen compact gaming PC called the GPD Win Max.

Earlier this year we learned it would be powered by an AMD Ryzen Embedded processor and that it would have a larger screen and keyboard than earlier models, making touch-typing possible.

Now we have the best look yet at what the GPD Win Max will look like, thanks to a leaked image shared to the gpd_devices discord channel (and to reddit). 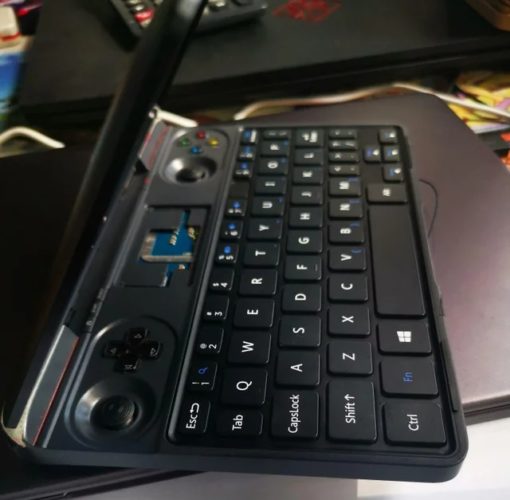 The first thing to note is that we seem to be looking at a prototype, so it’s possible some things could change before GPD officially launches the Win Max later this year.

The second is that this isn’t so much as a replacement for the pocket-sized Win or Win 2 as it is a larger, more powerful option for folks that are willing to carry around a tablet-sized device that probably won’t slide into a pocket.

It’s expected to feature an AMD Ryzen processor with Radeon Vega graphics, a 1280 x 800 pixel display, and it looks like the company has completely overhauled the keyboard to make this feel more like a full-fledged computer.

If the new keyboard design looks familiar, that’s because it seems to be very similar to the one GPD used for the GPD P2 Max mini laptop. That means you should be able to touch-type with 10 fingers on the Win Max rather than two-finger (or thumb) typing as you would with smaller members of the GPD Win family.

The keyboard is still small enough that GPD had to make some compromises. The Del and Backspace buttons are on the same keys. The number keys are half-height, and the punctuation keys are half-width. But this is definitely a step up from the tiny keyboard used for the GPD Win and Win 2.

While the GPD P2 Max is meant to be a general purpose computer, the Win Max is designed for gaming. So there are left and right analog sticks above the keyboard, X, Y, B, and A keys on the right, and a Playstation Vita-inspired D-Pad on the left.

There’s no room for a palm rest, but GPD will place a touchpad above the keyboard (between the game controllers). In the image above you can see an empty spot where the touchpad will go. That may not be the optimal placement for productivity, but it could be a good solution for games that require mouse or touchpad input.

We’ll likely have to wait a few months to see the final design and learn more about the specs and pricing. GPD doesn’t plan to start shipping the Win Max until early next year, and it probably won’t go up for pre-order until after the company’s crowdfunding campaign for the P2 Max is completed and that models starts to ship this fall.