The GPD Win Max is a mini gaming laptop with an 8 inch HD touchscreen display, an Intel Core i5-1035G7 Ice Lake processor and Iris Plus graphics, 16GB of RAM, 512GB of storage, and built-in game controllers.

GPD will begin taking pre-orders for $779 through a crowdfunding campaign set to begin on May 18th, and the company plans to begin shipping the Win Max to backers after the campaign ends on June 30th. The price will likely go up at that time though.

The company has already sent a few pre-production units out to reviewers, and mine arrived today.

After tinkering with the Win Max for a few hours, I can already tell you that this is without a doubt the most powerful laptop with an 8 inch or smaller screen to date, and there’s a lot to like about the little computer, whether you plan to use it primarily for gaming or productivity.

The system feels nice and responsive. The 1280 x 800 pixel display looks reasonably sharp at 100-percent scaling, and it’s probably lighter on the GPU performance and battery life than a higher-resolution panel would be. And the QWERTY keyboard is comfortable to type on (if you’re primarily entering text, anyway). 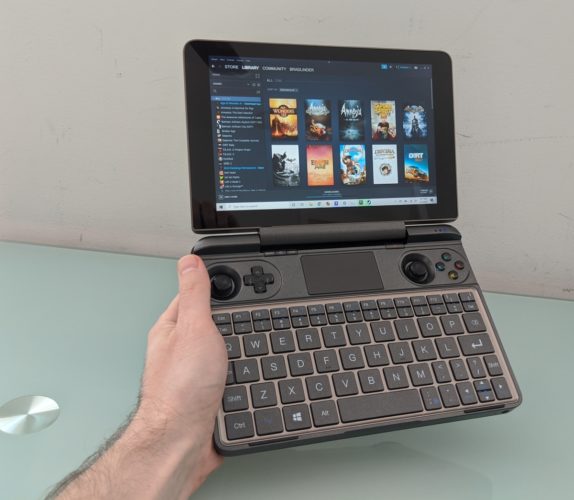 The GPD Win Max features WiFi 6 and Bluetooth 5.0. It has LPDDR4X-3733 RAM and PCIe NVMe solid state storage. There’s no shortage of ports — in addition to a Thunderbolt 3 port, there are USB 3.1 Type-C and Type-A ports, a full-sized HDMI 2.0b port, Gigabit Ethernet jack, 3.5mm audio jack, and microSD card reader. 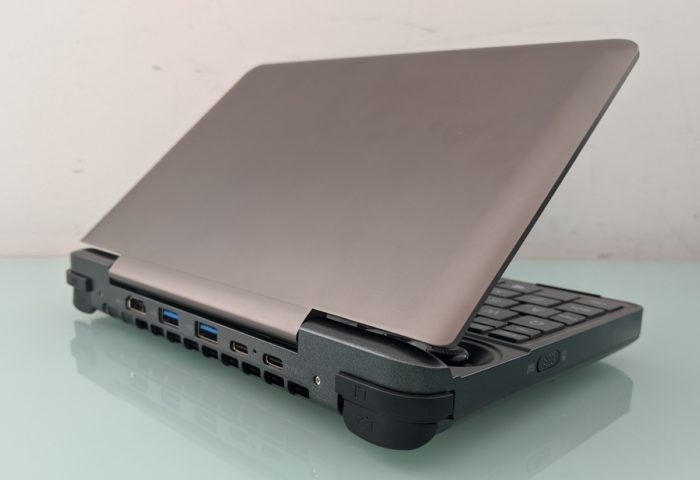 And not only does the computer have an Intel Core i5-1035G7 Ice Lake processor, but GPD has configured it to run at 25 watts for better performance (although you can decrease this in the BIOS if you want to prioritize battery life). 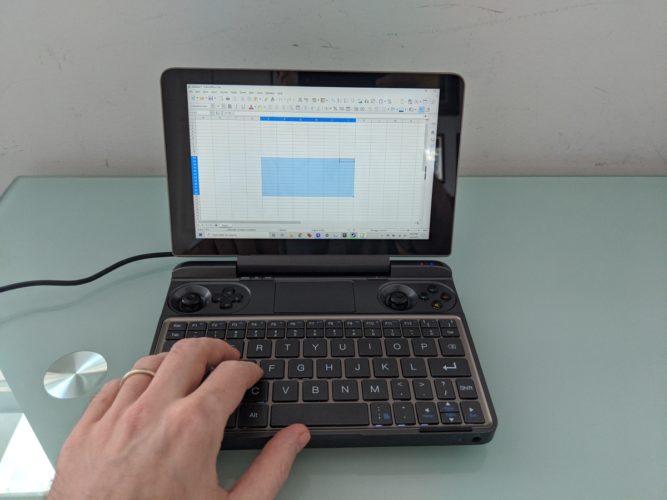 The computer’s twin cooling fans spin up constantly, and they’re quite loud. There’s no webcam. The game controller buttons are on the small side. And the keyboard has a few quirks that are going to be hard to get used to:

The keyboard is backlit, making this the first GPD laptop with a touch-type keyboard to feature illumination. But the lighting is pretty dim and .

Update: It does shine dimly through the keycaps, but not brightly enough to make out some functions in dim lighting (the blue Fn keys are particularly hard to make out).

OK, that’s a lot of keyboard quirks. But at leas this thing has a keyboard that you can reasonably expect to touch type on. The original GPD Win and GPD Win 2 handheld gaming PCs featured smaller screens, less powerful processors, and keyboards so small that thumb-typing was the only real option.

I haven’t tested battery life or performance extensively yet, but I plan to run some benchmarks, play some games, and maybe even use the Win Max for a bit of work in the coming days.

For now, here are some additional pictures that compare the GPD Win Max with some other compact laptops I’ve got lying around, including the 13.4 inch Dell XPS 13 9300 laptop and the 7 inch Peakago mini-laptop.

And here are some more pictures of the Win Max on its own: