The GPD Win Max is tiny laptop with an 8 inch display that’s also a handheld gaming PC thanks to built-in game controllers above the keyboard.

First launched in 2020 with an Intel Ice Lake processor and Iris Plus 940 graphics, the Win Max was the most powerful handheld gaming computer available at the time, and I was impressed at how well the unusual design worked for both gaming and general purpose use.

A year later, competition is heating up, so GPD is introducing a new GPD Win Max 2021 model with a choice of Intel Tiger Lake or AMD Ryzen 4000U processors. There’s also an interesting new option – existing customers can order a new motherboard for the original Win Max rather than buying a whole new computer. 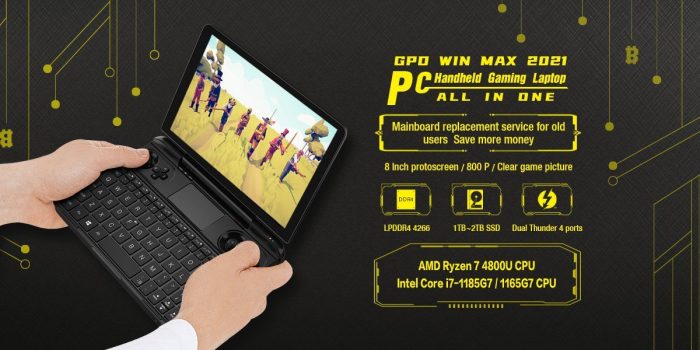 GPD hasn’t revealed pricing details yet, but the company says that the Win Max 2021 will go up for pre-order in China soon, and international customers will be able to pre-order through an upcoming crowdfunding campaign.

The new model will be available with three processor options:

All of these chips should bring significantly better graphics performance than the Core i5-1035G7 chip used in the original Win Max, while the AMD Ryzen processor also has twice as many CPU cores, which should bring a major boost in multi-threaded CPU performance.

Interestingly, it seems like while there may be a few other small changes, the chassis is pretty much the same as for the original Win Max. And that’s what will allow GPD to offer a motherboard-only option for folks that want to pry open their first-gen Win Max and swap out the old board for a new one in order to save money and cut down on e-waste.

Here’s everything we know so far about how the specs for the new Win Max stack up against the original.

Update: The company has confirmed that the Win Max 2021 will have two USB4 ports rather than Thunderbolt.

One thing the company has explicitly said will not change is the screen resolution – the Win Max 2021 will still have a 1280 x 800 pixel display. 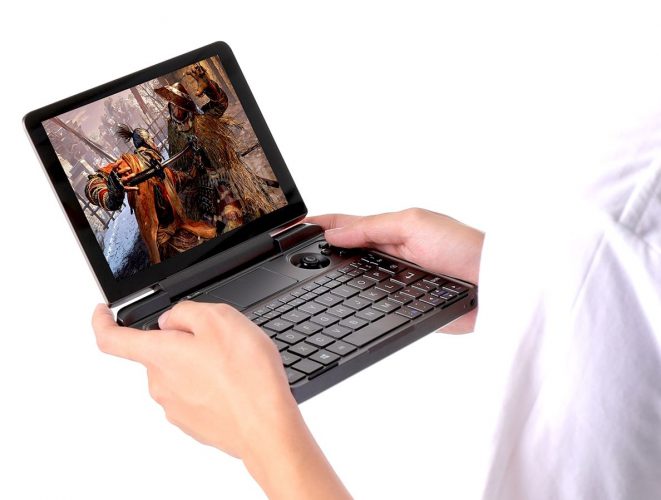 As I mentioned, competition in the handheld gaming PC space is heating up, and GPD’s announcement comes just a day after rival mini PC maker One Netbook launched a crowdfunding campaign for the ONEXPLAYER. That’s a handheld gaming computer with an 8.4 inch, 2560 x 1600 pixel display, an Intel Tiger Lake processor, 16GB of RAM, and up to 2TB of storage.

The ONEXPLAYER looks a bit like a large Nintendo Switch, but it’s a full-fledged gaming PC that offers strong performance and good ergonomics, although at 1.8 pounds it’s kind of hefty. You can find more details in Liliputing’s ONEXPLAYER review.

Meanwhile, a newer company called AYA, is beginning to ship the AYA Neo handheld gaming PC to backers of its crowdfunding campaign. It’s a 7 inch console with no physical keyboard, featuring a 1280 x 800 pixel display and an AMD Ryzen 5 4500U processor.

The company seems to have undergone a leadership change recently and it’s unclear if or when new customers will be able to purchase an AYA Neo now that crowdfunding has ended.

And GPD also continues to sell its own smaller handheld game console with an Intel Tiger Lake processor. The GPD Win 3, which launched via crowdfunding earlier this year, is now available through retail channels. It has a 5.5 inch display that slides up to reveal a capacitive touch keyboard. The smaller screen and controllers make the Win 3 a more portable device than the others, but it can also be a little less comfortable to use if you have large hands.