The GPD Win 2 is first and foremost designed to be a mobile gaming PC. It has a 6 inch, 1280 x 720 pixel touchscreen display and physical gaming buttons that make it possible to play all sorts of games on the go, including Batman: Arkham City, Grim Fandango Remastered, and even StarCraft II (although you’ll probably want a mouse).

But the Win 2 also has a QWERTY keyboard that you can use for entering usernames, passwords, URLs, or longer chunks of text.

I wouldn’t want to use the built-in keyboard for an extended typing session, but the keyboard is a big improvement over the one found on the first-generation GPD Win. 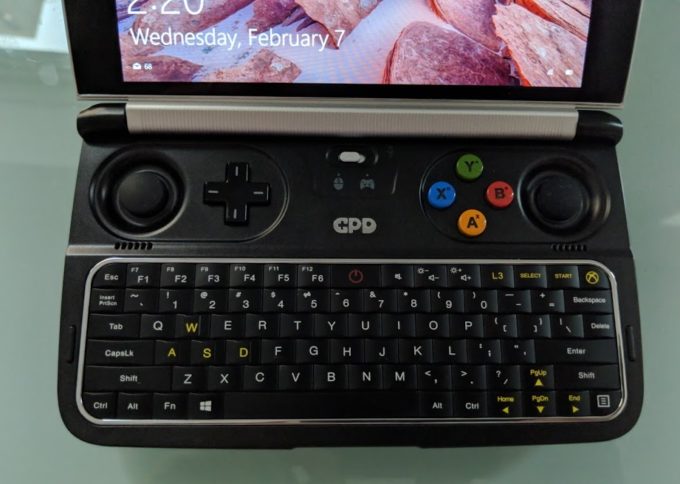 The keyboard has pretty much every feature you’d find on a full-sized keyboard including arrow keys, volume and brightness controls, and F1 – F12 keys (although they’re all crammed onto the left side of the keyboard, so you have to press F1 + Fn to trigger F7, for example).

Some of the most important keys for gamers are specially marked. The arrow keys and W, A, S, and D keys are labeled in yellow instead of white, for instance. And those W, A, S, and D keys (which are often used as forward, back, and side buttons in games) also have a raised area that makes them a bit easier to detect with your fingertips when you’re looking at the screen rather than the keyboard. 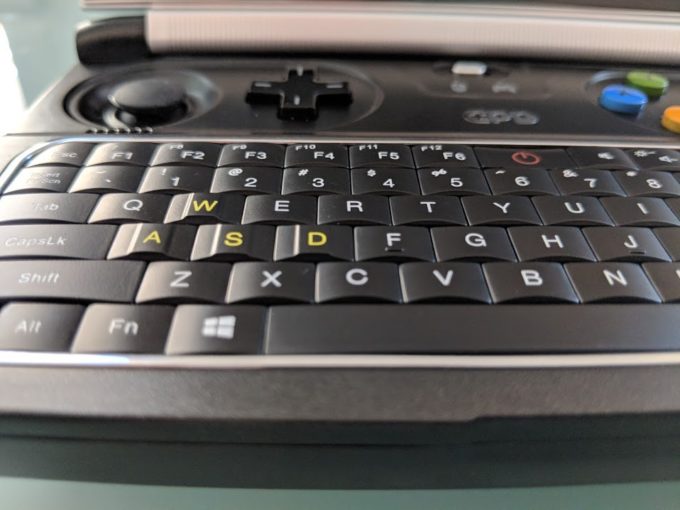 GPD placed the power button in the center of the top row, but it’s recessed in a way that makes it unlikely that you’d accidentally press it and put the computer to sleep unexpectedly. You also have to press it reasonably hard to turn the PC on or off.

There are also L3, select, start, and Xbox buttons to the right of the volume and power buttons, giving you access to a few gaming buttons on the keyboard itself. 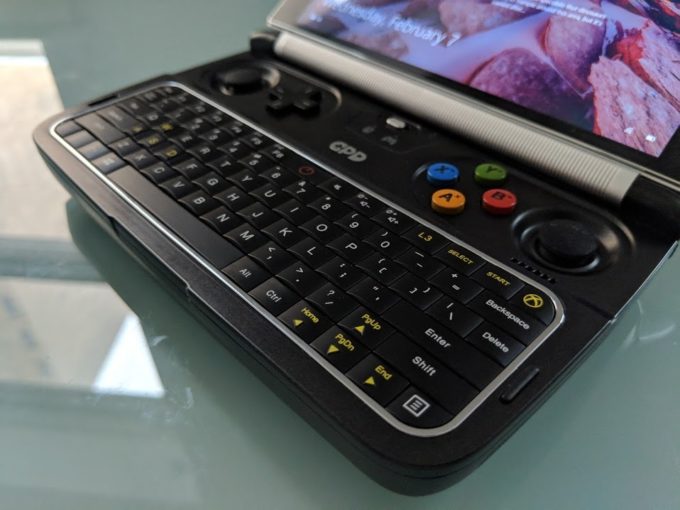 All of the keys have a gentle slope, so while there’s no much room between the keys, the surface area your finger comes in contact with is actually rather small. That may sound like a bad thing, but it helps you feel where one key ends and the next begins.

Still, the keyboard is really too small to be comfortable for 10-finger touch typing. The keys are small and you have to press them pretty hard in order to trigger any action. I found myself looking down at the keyboard more than I usually would on other devices.

One of the most comfortable ways to type is using two thumbs. Odds are that you’re going to spend a lot of time holding the GPD Win 2 with two hands, much the way you would an Xbox or PlayStation game controller. This puts the entire keyboard within range of your left and right thumbs.

I did find that I was able to type a bit more accurately by putting the Win 2 down on a table and using 3 or 4 fingers to type. I still had to look down at the keyboard, but my accuracy and speed improved.

That said, I can’t type nearly as quickly on this tiny computer as I can on my phone or a laptop or desktop PC.

So yeah, the GPD Win 2 keyboard is the least efficient means of text input I have in my house right now, unless you count the remote controls that come with my Roku and Amazon Fire TV devices (and which you use to enter passwords with an on-screen menu).

I wouldn’t want to type a term paper or business report on this thing. But it’s perfectly serviceable for entering passwords, URLs, and search terms, which I suspect is the main thing you’re likely to do with this sort of miniature computer.

The GPD Win 2 is a niche device with a price tag that’s almost twice as high as its predecessor. But while it has a laptop-like price, it doesn’t really have a laptop-class keyboard. If that’s what you want in a portable computer, you might need to look elsewhere.

You might not need to look too far though. GPD also sells a tiny computer that’s not designed for gaming. The GPD Pocket which has a 7 inch screen and a larger keyboard, but a slower processor and no dedicated game control keys.

Or you could just buy a regular sized laptop and get a regular-sized keyboard. You just wouldn’t be able to fit it in your pocket or hold it in two hands like a Nintendo DS.

The GPD Win 2 is expected to ship later this year for $699 and up, but it’s up for pre-order from Indiegogo for $649. GPD sent me the prototype featured in this article for testing purposes.