The GPD Win 2 is a handheld gaming PC that looks like a cross between a laptop and a Nintendo DS. It’s set to ship in May, but the GPD Win 2 is up for pre-order for $649 through an Indiegogo campaign.

The full retail price is expected to be around $699 after the campaign ends. 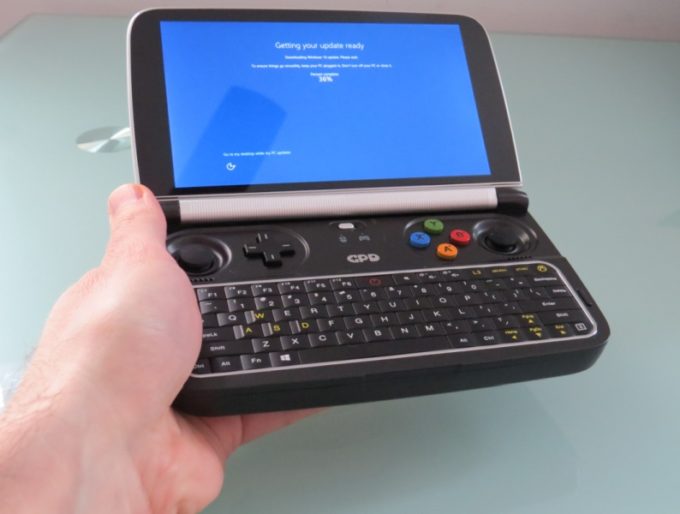 That makes this model almost twice as expensive as the original GPD Win, which I tested in 2016. But GPD has upgraded just about everything for the new model. It has a faster processor, more memory, faster storage, and an improved keyboard, among other things.

GPD sent me a prototype to test, and I’m just starting to kick the tires. But since there’s really nothing else quite like the GPD Win 2 on the market today, I figured I’d shoot an unboxing and first look video.

Keep in mind that this is a pre-production sample, but the final product should look pretty much the same.

That might not sound like a big difference, but GPD has upgraded the chassis from plastic to an ABS + aluminum alloy case, added two more shoulder buttons for gaming, and used the extra height to put a more powerful fan under the hood. 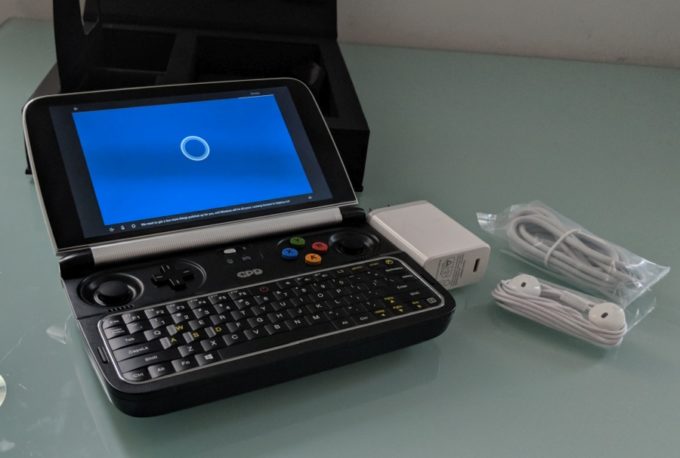 And you’ll certainly notice that fan. I’ve been performing Windows updates since I stopped recording the unboxing video, and the fan has been whirring the whole time. If you were hoping for a small, silent PC, this isn’t it. What you get instead is a tiny computer with the same Intel Core M3-7Y30 dual-core Kaby Lake processor used in the entry-level Microsoft Surface Pro tablet.

While Microsoft’s tablet has a higher-resolution display, longer battery life, and optional pen support, the GPD Win 2 has a more compact design, a QWERTY-keyboard, and gaming buttons including X,Y,A, and B buttons, analog sticks, a D-Pad, and 3 shoulder buttons on each side. There’s also a mouse/gamepad switch that lets you use the right analog stick to move an on-screen cursor and the L1 and R1 buttons to left and right-click. 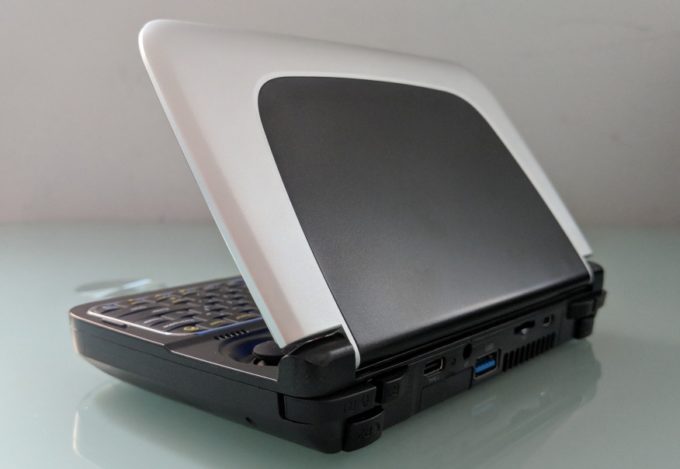 The 6 inch, 1280 x 720 pixel touchscreen display looks pretty good (note that you can see some dark lines in some of the pictures I took, but that’s due to my camera, not the display itself), and you can fold it flat at a 180 degree angle from the keyboard or tilt it to a more comfortable angle for handheld or tabletop use.

The keyboard is too small to comfortably touch type on, but it’s got everything you need to enter small bits of text as a two-finger typist. The layout is also a big improvement over the original, with slightly larger keys, better spacing, and a gentle curve that makes it easy to feel where one key ends and the next begins. 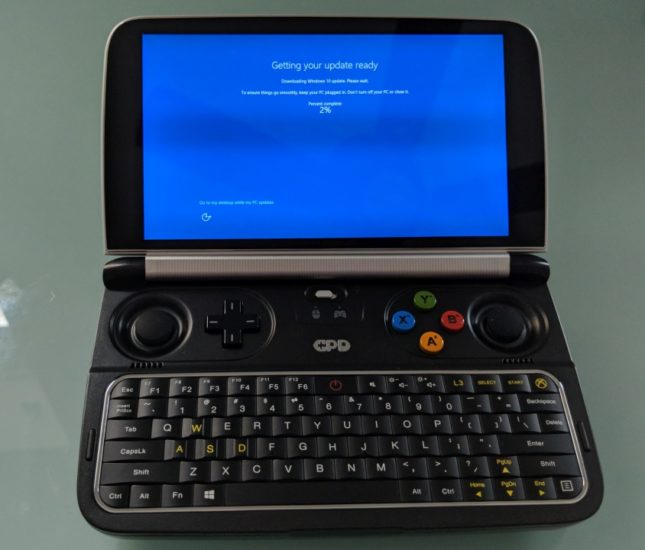 GPD didn’t put any ports on the sides or front of the Win 2, but on the back you’ll find a USB Type-C port (for charging or data), a headset jack, a USB 3.0 Type-A port, a microSD card slot, and a micro HDMI port.

The lid has a two-tone design that’s silver/grey and black, although I’ve seen some mockups of models with video game artwork in the black sections, so it’s possible we might see some custom versions of the GPD Win 2 in the future.

On the bottom of the computer there’s another vent for the fan (cooling is key), and a panel door that you can unscrew and remove to access the M.2 slot if you want to replace the computer’s SSD.

Out of the box, the system comes with a 128GB drive and Windows 10 Home pre-installed, but it’s nice to have the option to upgrade. 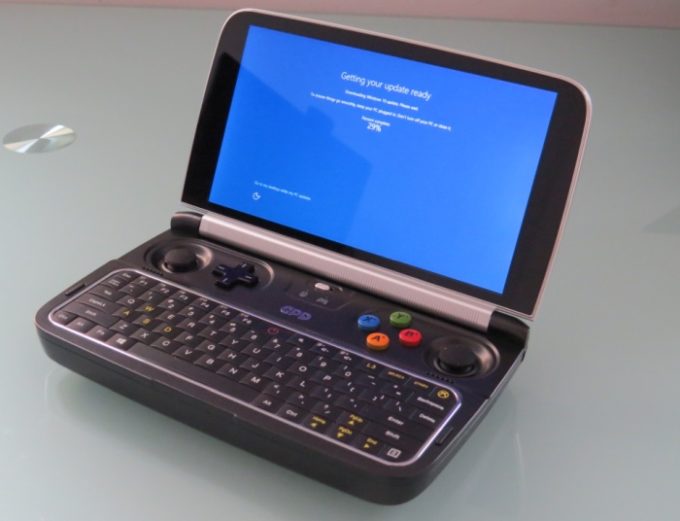 After my demo unit is finished installing updates, I’m looking forward to loading some games on it and taking them for a test drive. But I’m also curious to see how the GPD Win 2 function as a general purpose computer. I have a feeling the keyboard is going to be too frustratingly small to use for blogging or composing long emails. But I like the idea of a pocket-sized computer that you can use for gaming, multimedia, web browsing, and maybe sending a quick message, editing a document, or performing other work-related tasks from time to time. Let’s see if this fits the bill.

One thing I should point out is that my demo unit has a bit of light bleed near the bottom right side of the screen. It’s not something you really notice when looking at the display head-on, but if you look down at the display from above, you can see light shining through. 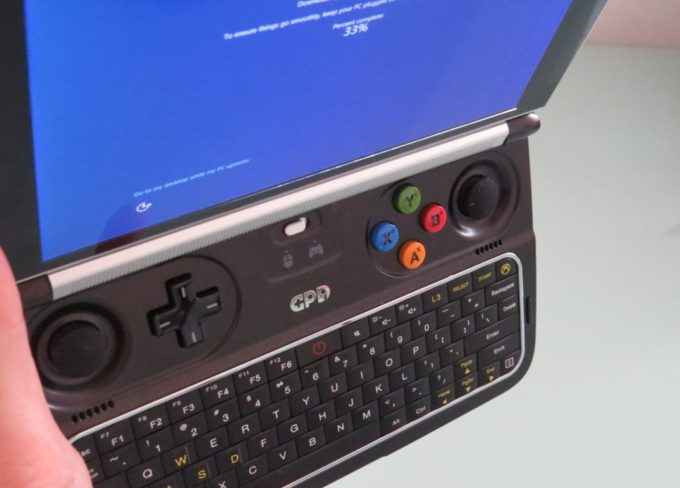 Since this is a pre-production unit that was described to me as a “prototype,” I’m not too worried about that issue. But it’s something that would probably annoy me if I spent $649 or more to buy a finished product. Hopefully GPD will work out any such kinks before shipping the Win 2 to customers this spring.