The GPD Win 2 is handheld computer that looks like a cross between a tiny laptop and a Nintendo DS. It’s a clamshell device that’s a bit larger than a chunky phone, and which features a 6 inch touchscreen display, a QWERTY keyboard and built-in game controller buttons.

GPD raised more than $2.7 million for the Win 2 through an Indiegogo crowdfunding campaign earlier this year, and now the company has announced that the first 1200 or so units will ship to backers of that campaign by May 15th.

Another 7,000 units will ship later this month, and it’s likely the GPD Win 2 will be available through retail channels in the coming months for folks who missed out on the crowdfunding campaign. 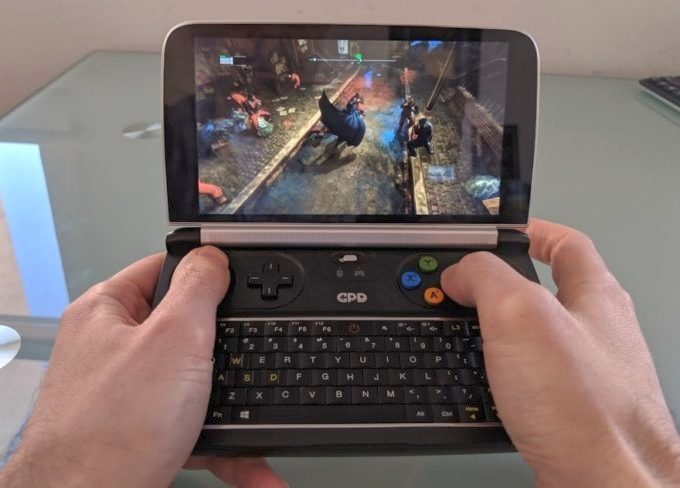 I got a chance to review a pre-release GPD Win 2 earlier this year, and I was pretty impressed with the tiny computer. It’s an upgrade from the first-gen GPD Win in almost every way… but with a $699 list price, it’s still kind of a hard device to justify unless you really want to play PC games on a handheld device.

With an Intel Core M3-7Y30 processor, 8GB of RAM, and a 128GB SSD, the device is reasonably powerful. It also gets decent battery life, with up to 10 hours of run time (or less if you’re using it to play resource-intensive games).

But the small screen and keyboard make it difficult to treat the Win 2 as a full-fledged laptop replacement. It’s a portable gaming PC that you could use for other activities like watching movies, surfing the web, or even coding. But I wouldn’t recommend it as a primary PC for anyone that does a lot of typing or who needs a large display for editing photos, videos or other content. It’s basically in its own category: a portable gaming PC that you’d buy in addition to a laptop, phone, and tablet, not as a replacement for any of those things.

Anyway, I’m still kind of amazed that this thing exists… although I’m not surprised that GPD was able to meet its estimated ship date.

A lot of individuals and startups use crowdfunding as a way to raise money to complete their research, development, and manufacturing. But GPD is already a well-established company that’s been shipping portable game devices for years. GPD tends to use crowdfunding campaigns as a sort of pre-order system that also helps generate buzz rather than as a funding mechanism to help turn an idea into reality.