A bunch of new mini-laptops are coming in the next few months from GPD, One Netbook, and Chuwi. None are expected to be dirt cheap, but some will have more affordable than others.

Today GPD announced that its upcoming 8.9 inch will sell for $529 and up. The company hasn’t revealed a release date yet, but GPD plans to launch an Indiegogo crowdfunding campaign soon.

Update: It looks like GPD has changed the name from Pocket 2 Max to P2 Max to differentiate its new 8.9 inch mini-laptop from the 7 inch models that precede it. That makes sense, since it’s going to be a bit tougher to actually fit in your pocket. 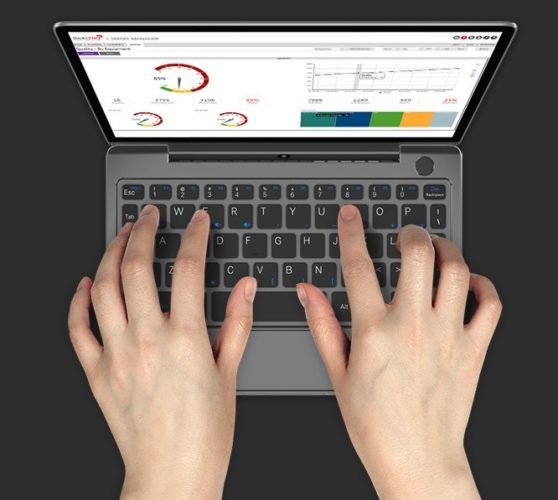 If you want a model with higher-performance specs, GPD has you covered. For $705 you’ll be able to get a P2 Max with an Intel Core m3-8100Y dual-core/quad-thread Amber Lake processor, 16GB of RAM, and 512GB of solid state storage.

Both models measure 8.1″ x 5.8″ x 0.7″ and weigh 1.5 pounds, and both feature USB Type-C and Type-A ports, micro HDMI, and 3.5mm headphone jacks. There’s a 2MP webcam, making the P2 Max the first GPD mini laptop to feature one. And there’s a fingerprint sensor built into the power button.

Since the P2 Max is significantly larger than the company’s earlier mini-laptops (the original GPD Pocket and Pocket 2 both have 7 inch displays), there’s room for a larger keyboard and for a touchpad below it (earlier models had tiny optical touch sensors).

While the P2 Max is set to undercut the One Mix 3 Yoga in terms of pricing, it’s worth noting that One Netbook’s upcoming mini PC does have a few features GPD’s lacks, including a 360-degree hinge that lets you use the computer as a tablet, support for an optional active pen (sold separately), and a backlit keyboard.

Meanwhile Chuwi hasn’t announced pricing for its upcoming Minibook yet. But like the P2 Max, the Chuwi Minibook with its 8 inch display is expected to come in two versions: a higher-priced model with an Intel Core m3-8100Y processor and a lower-priced model with an Intel Celeron N4100 Gemini Lake chip. Gemini Lake chips cost a lot less than Amber Lake processors, so I’d expect a model with that processor to sell for less than the entry-level $529 GPD P2 Max.

Update: GPD has posted a video showing gameplay on the P2 Max:

Update 2: And another video showing general purpose computer use.