The company behind the GPD Win handheld gaming device have been making Android handhelds for years. But GPD’s Win got a lot of attention because it’s a Windows-powered handheld that can run PC games.

Now the company is planning to launch something new: a 7 inch laptop that’s small enough to slide into your pocket.

It’s called the GPD Pocket, and it’s expected to support either Windows 10 or Ubuntu 16.04 Linux. 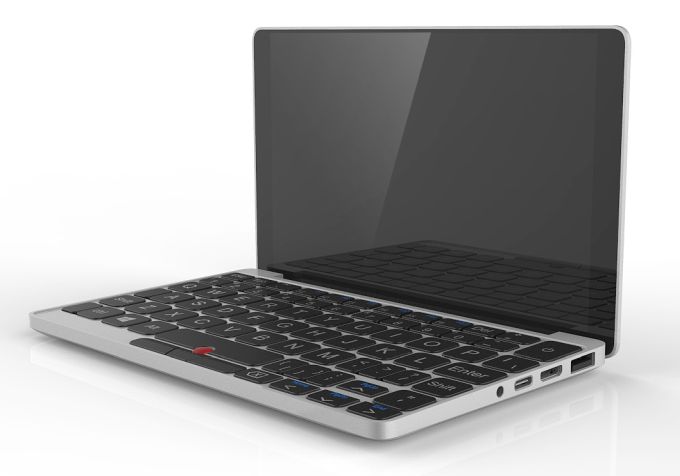 GPD is just showing off a few rendered images and mockup prototypes at this point, so we’ll have to wait a while to see a final, working product. But the company expects the system’s features to include:

The system is said to be slightly larger than the GPD Win, and it has an aluminum chassis. Pictures show a USB Type-C port, a full-sized USB port, an HDMI port, and a headset jack. And while the laptop is too small to fit a full-sized keyboard and touchpad, it does have a QWERTY keyboard and a ThinkPad-like pointing nub that you can use to move a mouse cursor on the screen, as well as left and right buttons for clicking.

The lack of palm rests could make typing kind of uncomfortable, but I doubt anyone would use this sort of device as their only PC anyway. Instead, it’s a sort of portable laptop that can handle light-weight PC gaming duties on the go, but which you could also use to tap out a quick email, do some web browsing, or other activities that might not require a big screen or a high-power processor.

GPD sent me a demo unit of the GPD Win handheld to review last year, and I was pretty impressed with its performance… while it worked. But after a brief period the keyboard stopped working and I sent my review unit back to GPD.

I know I haven’t been the only person to run into bugs with the GPD Win, so hopefully the company will take feedback from its first Windows handheld and apply it to the upcoming GPD Pocket to make a device that’s more reliable.

According to ton-chi-ki, GPD plans to launch an Indiegogo crowdfunding campaign for the GPD Pocket in February.

There’s no word on the price or release date for the new model. But it looks like a promising device for folks lamenting the fact that major PC makers seem to have dropped out of the UMPC market in recent years.