GPD has launched a crowdfunding campaign for its tiny laptop called the GPD Pocket. It’s a 1.1 pound notebook with a 7 inch full HD display and support for Windows or Ubuntu software.

The GPD Pocket is up for pre-order from Indiegogo for $399, and the company hopes to ship the little laptop in June. 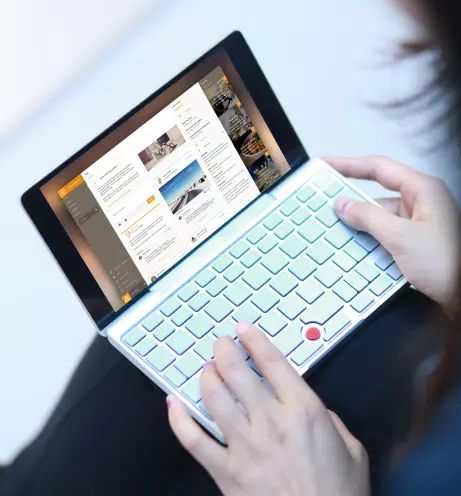 The little computer measures just 7.1″ x 4.2″ x 0.7″ which makes it just a little larger than a big smartphone when the lid is closed. Whether you can actually fit the GPD Pocket in your pocket depends on how big your pockets are, I suppose.

Update: GPD had originally said the Pocket would feature an Atom x7-Z8700 CPU and 4GB of RAM, but the company has updated the project to feature 8GB of memory and a slightly faster Atom x7-Z8750 chip.

The laptop has a 7,000 mAh battery that GPD says should be good for up to 12 hous of run time, and the computer has a magnesium alloy case. There is a fan under the hood to help keep the system cool.

Instead of a trackpad below the keyboard, there’s a small pointing stick.

This is the second Intel-powered device from GPD. The first was the GPD Win gaming handheld, which has a smaller screen, a smaller keyboard, and an emphasis on gaming, thanks to a set of gaming buttons. That model launched late last year and recently got a hardware refresh.

While the Win was aimed at mobile gaming, the Pocket is more of a tiny computer that you can take anywhere. While the Cherry Trail processor is a few years old at this point, it’s a low-power chip that should offer good enough performance for many common Windows tasks such as web browsing or document editing.