The upcoming GPD Pocket 3 is will be a tiny laptop computer with a small screen, a touch-typeable keyboard, and a brand new design.

Concept drawings released by GPD show a compact computer that has a few features the original GPD Pocket and the Pocket 2 lacked, including a touchpad and webcam. There’s also a modular section that will let users customize one of the ports on the back of the little computer. 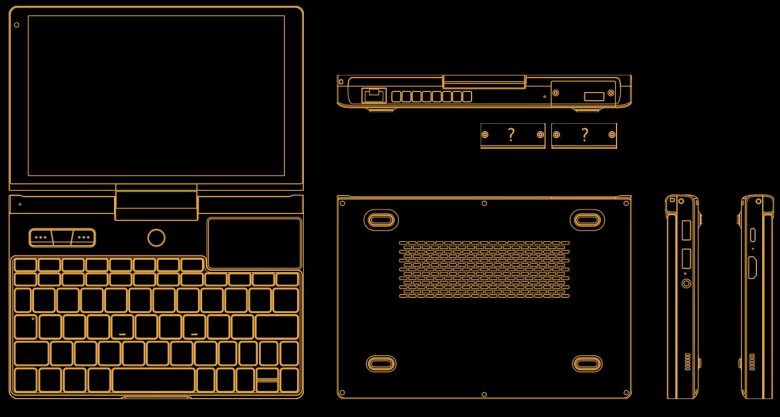 GPD hasn’t announced pricing or availability details yet, and the fact that the company is only showing off line drawings rather than real-world or rendered images suggest it could be a while before the Pocket 3 is available for purchase.

But from the concept images, we can see that GPD’s current design would include a full-sided HDMI port, one USB-C port, two USB-A ports, a headset jack, and an Ethernet port plus that customizable, modular section that will support at least a few different modules.

The only one shown is a third USB-A port, but given the design of the Pocket 3, I wouldn’t be surprised if GPD, for example, decided to offer a serial port option for customers who need one. That would effectively make the Pocket 3 both a follow-up to the 2018 GPD Pocket 2 mini-laptop and the 2019 GPD MicroPC, which is a handheld designed for IT professionals.

That said, part of the appeal of the MicroPC was also its price. With an Intel Celeron Gemini Lake processor, it was less powerful and substantially more affordable than the GPD Pocket 2, which had an Intel Core m3 chip.

GPD hasn’t announced what processor or processors it will use for the Pocket 3, so I’m not even going to speculate about pricing.

We should find out more about the next member of the GPD Pocket family closer to launch… whenever that is.

What you concerned Pocket series will continues mission to Pocket 3, the modularized pocketable PC!#gpdpocket3 #newconcept pic.twitter.com/NIpkvTMC8M