The GPD Pocket 3 is a mini-laptop with an 8 inch touchscreen display, a swivel hinge that lets you flip the screen 180 degrees and fold it down flat over the keyboard for use in tablet mode, and full-sized HDMI and Ethernet ports.

It also stands out because it’s a modular laptop: you can remove the USB Type-A port on the back and replace it with a module to add functionality to the little laptop. When GPD launched the Pocket 3 last year, there were three modules available. But now the company introduced another module: a microSD card reader that sells for $30.

The microSD card reader module supports theoretical read/write speeds up to 160MB/s and 90MB/s, respectively and works with all versions of the GPD Pocket 3, including models with Intel Pentium Silver N6000 or Intel Core i7-1195G7 processors.

First announced in March, the module was added to GPD’s AliExpress store on April 21, 2022, although it was out of stock a few hours after it was first announced.

Swapping out GPD Pocket 3 modules is pretty simple: they’re held in place with just two screws. So you just remove those screws, pop out the old module, insert the new one, and then replace the screws. Since they’re basically connecting via a USB interface, they should be recognized immediately without the need for a reboot.

The KVM module is one of the most niche options and truly shows one of the key benefits of a modular device like the Pocket 3. It has HDMI and USB inputs, allowing you to connect the Pocket 3 to another PC or server and use it like a terminal using the mini-laptop’s display, keyboard, and touchpad to control the connected device.

This can come in handy for IT pros who want to be able to connect directly to a headless server, for example. It’s not a feature most people will ever use, so there’s little reason to make the port available on all models of the mini-laptop. But folks who want the KVM module have the option of adding it.

Another benefit of modularity is that a company like GPD can continue adding new hardware features to a device even after it’s already shipped. While it wasn’t clear last year whether GPD would actually do that with the Pocket 3, the announcement of a new microSD card reader shows that the company is indeed continuing to develop new products for the mini-laptop.

Third-party developers can also create their own modules – one developer is working on a 4G LTE module and a “Clicker” module that adds power and volume buttons that are accessible when the Pocket 3 is folded for use in tablet mode. 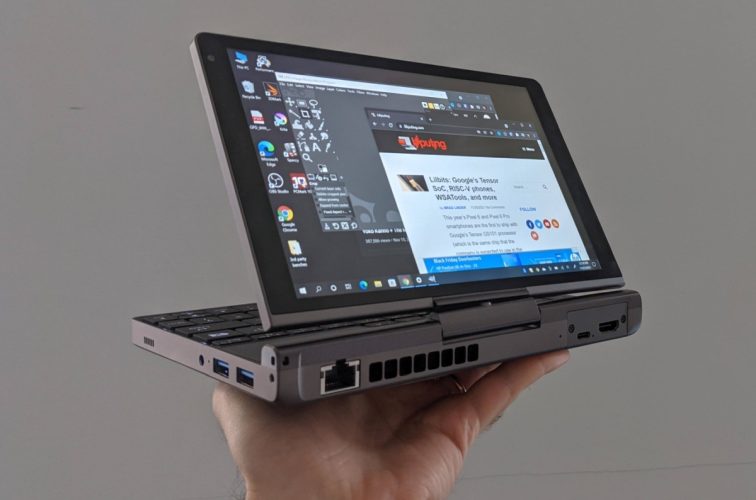 While this kind of modularity is rare, GPD isn’t the only company taking this approach. The Framework Laptop is a 13.5 inch notebook where all the ports are modular. In fact, you can even sacrifice a port for an expansion card that adds additional storage space, among other things.

But GPD is the first company to offer a modular mini laptop with an 8 inch screen.

The GPD Pocket 3 is available for purchase through an Indiegogo InDemand campaign with prices starting at about $698 for a model with an Intel Pentium Silver N6000 processor or $1,047 for a Core i7-1195G7 model.

Alternately, you can save a few bucks by ordering directly from GPD’s AliExpress store or spend a bit more to purchase the Pocket 3 from Banggood and GeekBuying for slightly higher prices,

For more details, check out Liliputing’s review of the GPD Pocket 3. Or for a run-down of key specs, check out the table below.