GPD unveiled the design and specs for its upcoming Pocket 2 mini laptop in June. While the first-gen GPD Pocket had an Intel Atom processor, a 7 inch touchscreen display, and a tiny keyboard with a pointing stick rather than a touchpad, the GPD Pocket 2 had a faster Intel Core M3-7Y30 processor, a similar display, a slimmer body, and a redesigned keyboard with no pointing stick.

The processor upgrade was pretty well received by potential customers. The decision to rely solely on the touchscreen for mouse/cursor input? That was a lot less popular.

So GPD delayed its planned crowdfunding campaign and redesigned the keyboard. Here’s what the company came up with. 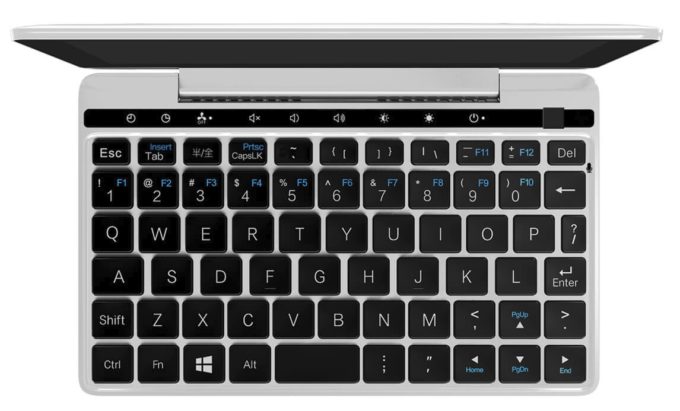 In a nutshell, the company added an optical touch sensor to the upper right corner, to the right of the power button. There are left and right mouse-click buttons all the way on the left side.

This means you’ll need to lift your hands from the keyboard to use the touch sensor, but you should get more precision than you would have using the touchscreen alone.

Of course you can also plug in a USB mouse or use a Bluetooth model if you prefer.

Other changes to the keyboard layout include the moving of the tab key to the top row, next to the Esc button and a Caps Lock key which is also a PrtSc key when you press the Fn button.

The changes aren’t all that dramatic, because GPD had largely finalized the design. Adding an optical sensor and moving a few keys around didn’t require going all the way back to the drawing board, the way that inserting a touch sensor by the space bar probably would have.

The Pocket 2 will also ship with a capacitive pen, but will not have an active digitizer for pressure-sensitive input. And it will not have a 360-degree hinge for use in a tablet mode or a backlit keyboard… two features which a rival mini PC called the One Mix Yoga has. But the One Mix Yoga has a significantly slower processor which makes this a bit of an apples-to-oranges comparison, despite the similar physical designs of the two computers.

GPD hasn’t announced pricing for the Pocket 2 yet, but it’s expected to sell for less than the GPD Win 2 handheld gaming PC, which currently sells for about $700.